Article Do Verbal Threats Have A Lasting Affect On Young Children? 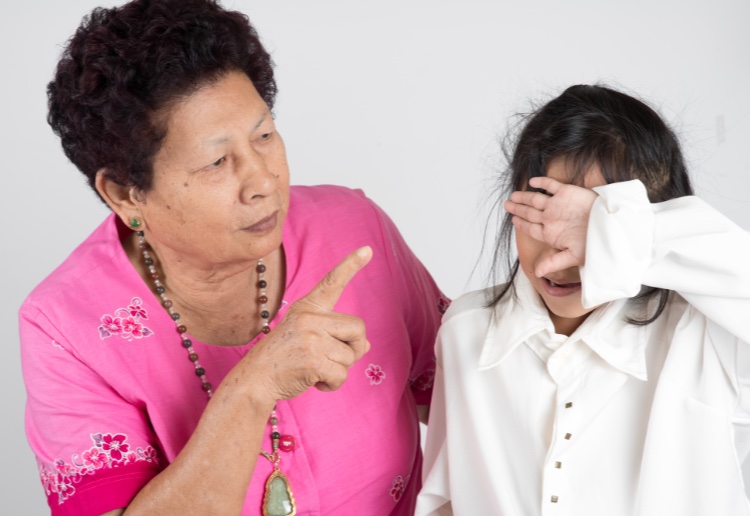 Verbal threats – we’ve all had them, whether we realise or not.

Have you ever been bound by the death card? Whether it be from parents, grandparents or anyone close to you?

It was one of my grandmother’s favourite: “Who knows how many years I have left to live Child” and “Don’t cry when I die” were two verbal threats I would hear on a regular basis.

Who Can Misbehave With The Threat Of Death Thrown In Your Face?

They were intended to bring me into line and force me to obey whatever unrealistic command was being hurled my way. I despised those words. They signified my defeat, because after all, who can argue with death, something so final.

Yes, the death card was a brutal and somewhat underhanded sleight of hand which would always be drawn out of nowhere to win any given situation.

No child really wants to contemplate the passing of their loved one, so really those words were an extremely quick win for the person using them.

Brutal, but fast! And regardless of how many times those words were abused, they never once lost their influence. The perfectly timed reminder of death during a power struggle between young and old is the ultimate winning blow of any disagreement.

Those Verbal Threats Are Poison!

I despised being bound by those words as a child, but I loathe them now even more as an adult.

This isn’t to say that openly discussing how short life can be with one’s children is wrong. In fact, I think age appropriate discussions about the fragility of life is imperative in giving children a realistic outlook on it so that unforeseen or unexpected circumstances don’t shock them beyond their means. It’s merely the use of death as a bargaining chip that I simply cannot stand.

Thankfully my parents don’t play this card with me…. my mum perhaps a handful of times. I don’t know if they can tell how genuinely awful it is or if they can see that it exhausted me growing up. Nonetheless I am deeply grateful that they don’t pull it out on me.

When you think about it, who is to say how long anyone has left to live the life they have been blessed with? How can you tell precisely how long a person has left to live? Older people tend to use this winning card against their young- but how can they be confident whether the person they are using it against is of sound mind? How do they know how near or far from the edge that young person really is?

Is the risk really worth taking? If you use the death card against a loved one who already didn’t value their life or were so incredibly close to the edge of their own life, and you didn’t realise it, would the threat still have the desired result? Or would the other person be left unaffected by their words in the knowledge that their own life was barely hanging in the balance?

My in-laws unapologetically play this card so frequently that I can pinpoint the precise moment the card will be projected at us like some sort of missile about to put an end to my personal standpoint on any given subject. They are professionals at it now and I can’t help but laugh at how predictable and dependable their use of this card is.

What hope does anyone have at getting their own perspective across once this final card is played? How can one get out of a death reminder? God forbid you should suggest that life is an unpredictable thing, for EVERYONE, where nothing is certain, no lifespan is guaranteed no matter how long and wonderful of a life we all hope to have. Nope, this only adds fuel to the fire and I am sure that it’s a technique that any professional hostage negotiator probably would not use.

Hearing these words from my in-laws has never had as much of a profound impact on me as hearing my husband utter those words – not about himself, but about his parents. This man has become so deeply impacted by their threats that he started reiterating their words for them, on their behalf during our own disagreements about their lack of boundaries.

I really wasn’t sure whether to laugh or stay serious, but the words somehow made me freeze on their own. My hubby wasn’t fooling around this time, he was actually playing his parents death card for them. And it got the better of me on so many levels. Were we really going to go there? Had we finally reached the ripe old age of death card use? Did he honestly feel that if we didn’t give in to his parents it would signify the end of time for them?

Was it going to now be acceptable to whip this card out in front of the children? Because goodness knows that I have not got the maturity to play that card with a straight face. In fact, my version of it would more resemble a scene straight out of a Bugs Bunny episode where he’s been shot and dramatises his death to an unrealistic degree of silliness – that is as close as I could get to this nonsensical death reminder!

The Danger Of Verbal Threats

These types of verbal threats, all types of threats really, harbour a kind of power which is relentless in its manipulative nature. Once they have reminded you that they’re old and may or may not have much time left to live (not based on any medical issues, but purely on guilt tripping you), how can you possibly continue to make your position valued when they are practically terrorising you with their threat?

Well, I’ve learned that one doesn’t negotiate with terrorists. And as important as it is to respect older loved ones, it shouldn’t come at the cost of your soul. The last thing I want is for this card to be played against my children by their paternal grandparents the way that my grandmother used it against me.

Mutual respect is important, but threats to gain compliance, psychological warfare, especially against children can be so extremely damaging and in some instances dangerous. Just imagine if a child is used to giving into these sorts of mind games how easily they could be fooled and manipulated by others with not so good intentions!

If you have a list of things you want to achieve before your time is unfortunately over on this wonderful Earth, then perhaps creating a bucket list might just be the ideal thing! Preventing others from living their life based on what you want for your own and playing the death card against them to gain control makes no sense whatsoever. Besides, if you condition a child to continuously give in to a verbal threat, how do you know that they won’t have this used against them one day by others?

I am confident that the chances of anyone dying based on someone not obeying their wishes are incredibly slim,. I personally have never read the cause of someone’s passing being that their child disobeyed them… no matter how close to a heart attack our children’s antics might bring us.

Did you / do you get these kinds of verbal threats? Tell us in the comments below.