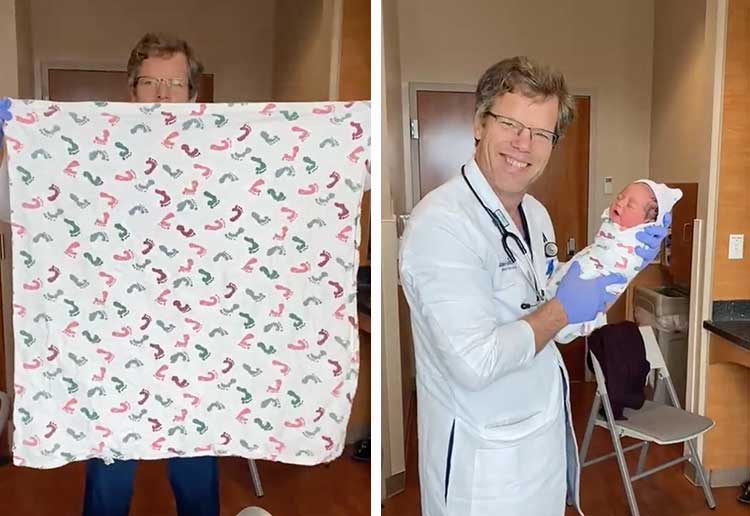 Trying to settle a newborn just got a whole lot easier thanks to a ‘magical’ swaddling technique that instantly calms crying babies.

Dr Nick Sartor, a paediatric specialist, showed the simple swaddling method in his very first TikTok video, which has gone viral, with more than six and a half million views. It shows a crying newborn instantly pacified after being wrapped in Dr Nick’s swaddle.

In the video, he uses a square swaddle, turned on an angle so that the baby is placed with its head at a corner, after it’s been folded over.

“You have to be quick, they don’t like it,” he explains, as he places the crying newborn with his head on one of the folded corners.

“Put his ears right at the crease, pin his arms down, roll him over and grab this corner and tuck him in like a burrito. Then bring the tail up, and finish it off.”

‘I would be so mad, don’t roll a newborn around like that!’

While the method has drawn praise from parents, others were concerned at Dr Nick’s handling of the baby, who seemed perfectly happy and settled once wrapped.

“As a postpartum nurse I do NOT approve this message,” commented Gionvanna.

“I would be so mad. I know they’re not as fragile but don’t roll my fresh newborn around like that,” said elisa_blvl.

“No offence doc but I work in postpartum and that gave me anxiety…. There’s gotta be a better way to teach a FTM how to swaddle,” replied another.

However, the majority of comments were supportive of the swaddling technique.

“This guy SPECALIZES in newborns, like yes y’all babies are fragile but they aren’t made of glass lol he’s fine!” added Frankie.

What do you think of this swaddling technique? Let us know in the comments below.