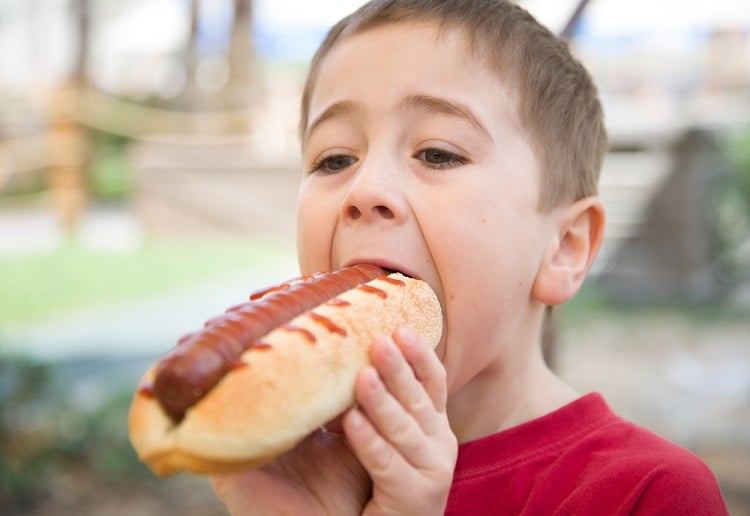 Research found that children who eat more than 12 hot dogs per month have nine times the normal risk of developing childhood leukaemia.

While another study, found children who ate hot dogs one or more times per week were also at higher risk of brain cancer.

The study examined the relationship between the intake of certain foods and the risk of leukaemia in children from birth to age 10.

It also concluded that there was a strong risk for childhood leukaemia for children whose fathers’ intake of hot dogs was 12 or more per month before conception.

This demonstrated in part that the dietary habits of parents before their child is born, as well as during pregnancy, can leave them more prone to disease.

In fact, researchers Sarusua and Savitz, who studied childhood cancer cases in Denver, found that children born to mothers who consumed hot dogs one or more times per week during pregnancy had approximately double the risk of developing brain tumours.

The Danger Of Hot Dogs

It’s been suggested that the nitrates contained in hot dogs are the cause of these health problems.

According to the Canadian Cancer Society, these nitrates act as preservatives to prevent food from spoiling, and they also add colour to the meat.

In a survey by Food Standards AU, the major sources of estimated nitrate dietary exposures across different population groups were vegetables (42-78%) and fruits (including juices) (11-30%). Highest concentrations of nitrate were generally found in leafy green vegetables, such as spinach, consistent with other international findings.

FSANZ found that the concentration of added colours in food in Australia is very low – mostly less than 25% of the maximum permitted levels. Estimated dietary exposure is less than 10% of the ADI, even among high consumers of added food colours.

Food standards Australia say, Australian consumers should be reassured that exposures to nitrates and nitrites in foods are not considered to represent an appreciable health and safety risk. Rather, the health benefits of fruit and vegetables are widely accepted, and eating these foods is recommended as part of a balanced diet.

Cancer Council says, the use of food additives in Australia is regulated by Food Standard Australia and New Zealand (FSANZ).

FSANZ does not approve an additive unless extensive testing has been undertaken and it has been shown that no harmful effects are expected from consumption. For a chemical to be approved it must be demonstrated that it is safe, there are good reasons to use it, it will be used in the lowest possible quantity and that consumers will be clearly informed when it is added (through labelling).

We are certainly not going to rush out and ban hot dogs, but as always make sure you are aware of what is in the foods you feed your children.