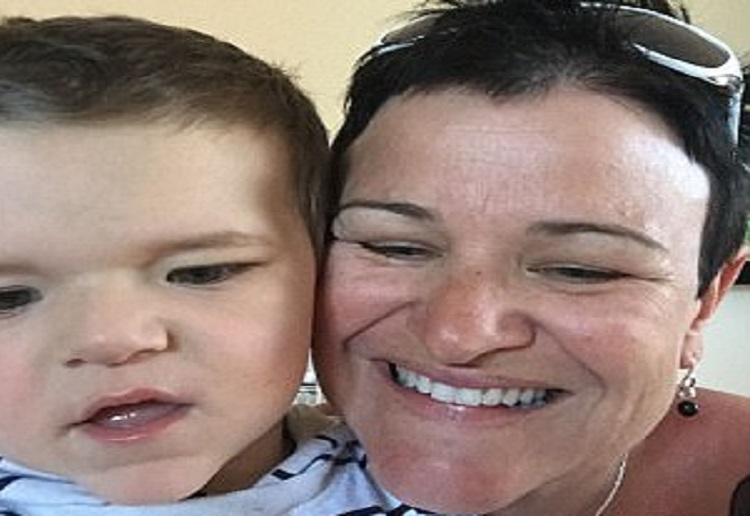 Every night before she goes to bed, Kellie Barnes, hopes that when she wakes up her six-year-old son will still be alive.

Tate Jones was born with a chromosome abnormality that is so rare it doesn’t even have a name yet. There are only four known cases in the world.

The abnormality manifests itself in 12 different illnesses that have sent Tate to the hospital countless times, undergoing 10 operations before he turned five years old.

He has become a puzzle piece for doctors, who do not know what will happen next and cannot tell Kellie and her family how long Tate will live.

When Tate was first born, he seemed like a perfectly healthy baby boy.

But 10 days later Kellie, 40, knew something was wrong.

Tate went into heart failure and he had open heart surgery when he was 21 days old.

Doctors said everything was now okay, but three months later Tate was back in the hospital once again.

That’s when they found out Tate’s bone marrow had failed and he was no longer producing red blood cells.

‘My whole world changed,’ Kellie said. ‘It was a roller coaster. All the different components of the disease started to unravel over the next two years.’

‘And he began to fight for his life.’

Tate was diagnosed with Diamond Blackfan Anemia, a rare blood disorder in which the bone marrow cannot make enough red blood cells to carry oxygen in the body.

Tate also has failure to thrive, meaning his body struggles to grow or take on weight.

Kellie said her son is also non-verbal and wheelchair-bound. He has allergies that are so severe he can only eat food after it has been pureed.

Tate had to have half off his tongue scraped off due to cysts, and his allergies often cause his bowels to bleed – leaning to numerous colonoscopies and gastrectomies, in which part of the stomach is removed.

A port used to supply red blood cells to Tate’s body ever 45 days, until doctors realised his body was attacking the very thing that was keeping him alive.

‘His team made the decision to pull out the port, which was like a garden  hose,’ Kellie explained.

‘And it just shattered when they pulled it out. He’s got two pieces of port stuck in him now.’

Tate is now on steroids that are artificially producing red blood cells for him, which have brought on a whole host of complications for the little boy.

‘He’s been on steroids now for 75 per cent of his life, which has long-term implications,’ Kellie said.

‘But as I said to the doctor, “Let’s just get through the short-term, let’s keep this boy alive'”.

‘I can’t tell you how many times he’s been pricked and poked,’ Kellie added. ‘The hospital said that’s Tate and we don’t know what Tate’s going to do next.’

‘They’re studying him so they can help other kids, but for us – we’ve got not idea what’s actually going to happen next.’

And even with the stress of operations and countless hospital visits, it is the unknown that has been the hardest to deal with when it comes to Tate’s condition.

‘We take it day by day, we go to bed and hope Tate wakes up in the morning,’ Kellie said.

‘I had to get comfortable with that. I think you’ve just got to make peace with whatever the future has ahead of you.’

In the present Tate is doing better than he has in a long time, attending a physical disability school in Melbourne and continuing to be a ‘very happy boy’.

‘He’s so cheeky,’ Kellie said. ‘His laugh is infectious. When he laughs, everyone around him then just starts laughing.’

When the days are hardest, Kellie always make sure to remind herself that it all comes back to Tate.

‘At the end of the day, you want Tate to have a quality of life with whatever time he has on this earth,’ she said.

‘When things aren’t going great mum always reminds me that I have to be the strong one, the mountain, the advocate.’

‘When I feel like giving up, I always have to make sure I keep it real.’

We wish little Tate all the best and loads of strength to keep up the fight.