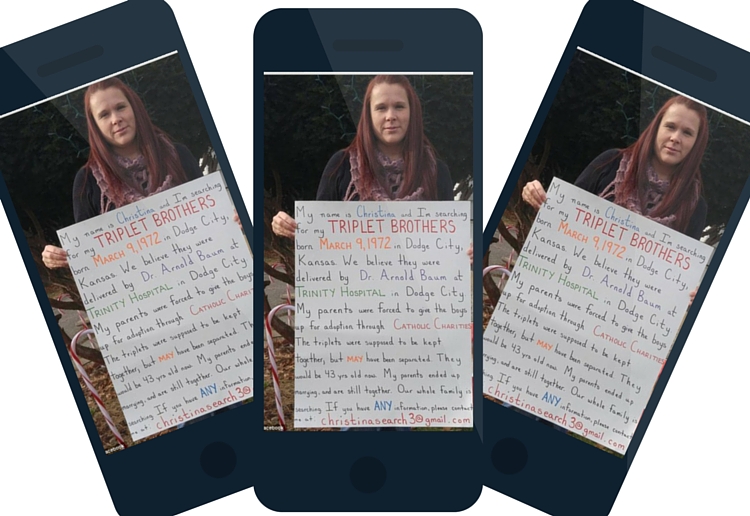 Facebook is being used to help a couple find their triplet sons – the sons they were forced to give up for adoption as teens.

According to the Daily Mail, Cynthia and Brian Bush of New York were forced to give up their triplets in 1972 and have married and raised three more children since this time.

The ache of wanting to know what happened to their first three sons has never left them and earlier this month they launched a search for them on Facebook to help the whole family find closure.

Their daughter Christina Wilcox has been instrumental in assisting them with their search.  Her Facebook post reads:

“My name is Christina and I’m searching for my triplet brothers born March 9, 1972 in Dodge City, Kansas,” Christina writes, “We believe they were delivered by Dr. Arnold Baum at Trinity Hospital in Dodge City. My parents were forced to give the boys up for adoption through Catholic Charities.”  Christina continues, “The triplets were supposed to be kept together, but may have been separated. They would be 43 yrs old now. My parents ended up marrying and are still together. Our whole family is searching. If you have any information please contact me at christinasearch3@gmail.com.”

Cynthia Bush, now 61, was just 16 years old when she became pregnant in 1971 with Brian Bush’s triplets, and they were forced to give them up.

Cynthia’s parents were appalled with her teen pregnancy and she was sent to live with an aunt in Kansas until she gave birth.

‘At that time, it was seen as kind of shameful for her to be pregnant at that age,” Cynthia told.  “I’ve always wondered about them and this search is giving me some closure.  I have lived with this [secret] for so many years.”

Cynthia and Brian kept the adoption a secret until a few years ago when they told their younger children about Cynthia’s trip to Kansas.

The family learned last week that though the triplets were supposed to stay together post-adoption, it seems that they may have gone to separate homes.

Cynthia Bush had always wanted the boys together, and even had officials at the Dodge City hospital put it in writing.

“I felt if I couldn’t be with them, at least they could have each other,” she said.

Cynthia Bush said her feelings toward locating her sons are still complicated.

“I just have mixed emotions about it,”she said. “I’d like to find them, but I don’t want to disrupt their lives completely if they don’t know they are adopted.”

Her Daughter Christina said, however, that she believes that finding the triplets will give her mother some peace of mind.

“She thinks she did something wrong,” she told NBC News. “But she didn’t have a choice.”

Messages poured in since Christina posted her Facebook message, which has been shared more than 5,000 times.

Christina called Catholic Charities earlier this year and was told the agency could open the file and try to find the triplets to see if they were interested in contact with their biological parents.

After the Cynthia and Brian Bush provide proof of identity, they can open a search for $150, plus an hourly fee, for research and attempts to reach out to their sons.