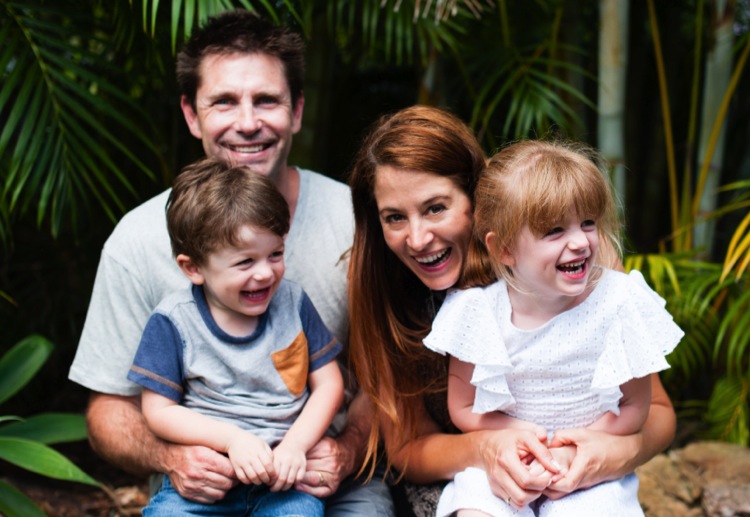 Proud mother of Isla and Jude and founder and director of the Sanfilippo Children’s Foundation, Megan Donnell shares her inspiring story of ‘people-powered medicine’ and finding hope and help in unexpected places.

When Megan Donnell’s beautiful children, Isla (7) and Jude (5), were diagnosed with the rare, genetic and fatal childhood condition, Sanfilippo Syndrome, her husband Allan and her were handed a photocopy of an outdated brochure by doctors and social workers and told there was nothing they could do. At the time they didn’t tell them it was fatal. Megan learned that from Googling it on her phone in the car on the way home.

What she was told once she saw a specialist was that there was no treatment, no cure and no hope. Like many parents of children with a rare genetic disease, Megan desperately wanted to understand more and began searching for answers.

What she found was that the research was far more advanced than she’d been advised and she soon made contact with a global network of researchers, pharmaceutical companies, patient groups and families raising funds for scientific research in to the condition. The Sydney mother and former management consultant seized an opportunity to start the Sanfilippo Children’s Foundation and negotiate bringing a targeted medical research program to Australia.

Almost three years on and the local arm of a pioneering clinical gene therapy trial is due to commence, giving Australian children access to a potential treatment. This is something that certainly wouldn’t have happened without the work of the Sanfilippo Children’s Foundation.

“Both my children have Sanfilippo Syndrome. When we learned our fate we were of course devastated, at that time Isla was just four years old and Jude was two. Sanfilippo is a rare genetic condition affecting about 1:70,000 live births. It’s a neurodegenerative disorder caused by a single genetic fault that means kids with the condition are deficient in an enzyme critical as part of the metabolic process.

The job of this enzyme is to clear waste from cells. So what happens is children are born seemingly healthy, but over time residual waste begins to build up and the cells are damaged. Unfortunately it mostly affects the brain and central nervous system.

The condition is progressive, degenerative and always fatal. A double diagnosis was hard enough, but then we were told there was nothing we could do, no treatment, nothing to slow the inevitable decline.

In fact one doctor told me: “Don’t go chasing around the world looking for a miracle cure. There is research happening but it won’t come in your kids’ lifetime”.

And that probably would have been true – if we were waiting for it to happen. But we decided not to wait. At the very least we knew we had to do everything we could to help advance clinical research, to bring forward an eventual treatment for future families and to build a legacy for Isla and Jude.

That diagnosis came three years ago. And if all goes to plan a gene therapy clinical trial will begin here in Australia later this year – most definitely in my children’s lifetime.

How did we get to this point? The Sanfilippo Children’s Foundation was formed in late 2013. Our vision is to fund medical research so a cure can be found in time for children battling Sanfilippo today, and for those born with it tomorrow. We are dedicated to providing children here in Australia with the same opportunity to access these emerging treatments as the kids in Europe and America.

When we began we knew that the kind of research we needed to fund was going to be expensive, more than anything we would ever see. At the time I thought that it would be beyond our abilities to raise – cake stalls and sausage sizzles certainly weren’t going to get us the kind of money we needed. The only way we were going to achieve our goal was if an “angel” donor came to our rescue with a gigantic gift.

So while we waited for that angel to swing in we chipped away in any way we could think of. We haven’t found our angel yet but we have enjoyed the most extraordinary support and generosity from all corners of the country (and in fact the globe). We have learned that individual everyday people really can make a difference and make things happen. That everyday people can achieve the most extraordinary things.

Last year we had a group of middle aged risk managers from a large financial institution run 1000km from Melbourne to Sydney in the Sanfilippo 1000. This year we have 55 people doing a collective 1000km on a single day along the Great Ocean Road. We’ve had bike riders, bakers, swimmers, singers, dieters, even bag pipers! There have been many events: trivia, discos, high teas, cocktail parties, billiard comps, golf days. It has mostly been grass roots and it has been amazing.

We often joke that we are curing Sanfilippo one sausage at a time. This truly is people powered medicine. We aren’t there yet but thanks to the incredible support of everyday people, we will get there…we will get a treatment for kids battling Sanfilippo today and those born with it tomorrow.

We are excited for the upcoming clinical trial, but also know that by definition a trial is an experiment so we won’t know just how much it will help children until it begins. But what we do know is that for a child living with Sanfilippo today, their only shot at treatment is on a clinical trial.

For the first time children with Sanfilippo and their families have the smallest glimmer of hope they might face a different future than the one they were handed upon diagnosis. It means Australian children may receive treatment, a shot at life.

The upcoming gene therapy trial is our first project, but we aren’t stopping there. We are mapping out new projects that could have a broader impact to the quality of life of Australian children with Sanfilippo Syndrome.

No stone will be left unturned as we work towards an effective treatment and one day a cure for this devastating disease. While we aren’t there yet, we will get there…we will get a treatment for children battling Sanfilippo today and those born with it tomorrow.

If you would like to Donate, go to www.sanfilippo.org.au

A charity anthem brings hope for Isla and Jude