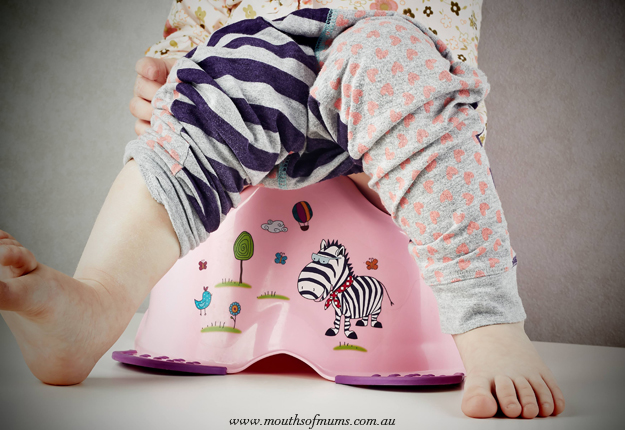 Toilet training is a big step for both mum and toddler. Be prepared and most importantly stay positive and calm.

The secret that many parents share is to wait for signs that your child is ready to begin this new journey. Don’t pressure your child or it will be an endless battle.

Some children show signs of being ready as early as 12-18 months, and some might be older than two years. There is no right time!

Your child is showing signs of being ready if he:

We asked our MoM members what they wish they knew before starting toilet training.  Read their helpful tips below.

Sarah recommends that you don’t start too early!

“If they are developmentally and physically ready it’s so much easier. If they aren’t, it won’t be. Let your child take the lead. When they are ready they will let you know.

Be prepared for accidents and make them no big deal. Otherwise they might develop feeling nervous about the process and this won’t help things to function naturally!

If you start and it isn’t working and you feel like you wish you’d waited, don’t be afraid to stop and put nappies back on! Sometimes their brain is ready, but body isn’t.”

Tammy suggested that you sit the potty in front of the TV to get them used to it.

“Then start to move it, further and further back, right into the bathroom. Also buy the toilet book with the sticker charts.”

Lucy had some great advice and said you should never push your child.

“My two have both been majorly stubborn but have chosen when they wanted to start. Miss nearly 4 wasn’t interested until a couple of weeks ago but now she takes herself to the toilet puts her seat with step & goes for it. So far only one accident she loves her sticker chart.

With everything else she’s ahead same as her older sister, just stubborn. But she wants a new bed & ottoman stool so the deal is get toilet trained & we will buy them. Exactly the same deal we made with her sister & they are 18months apart.”

Megs said, “Don’t rush it. Let the child take the lead. Leave the potty in the bathroom so it’s accessible for when they are ready to try.

Reward charts with stickers even for attempts.

My son was 3yrs 2months, and he lead the entire way. Best advice I had was from an older lady who had 4 kids, and that was, “there’s no rush, wait, it’s too stressful otherwise.”

Holly’s wise words included, “Wait until they’re ready. All kids are different and will be ready in their own time.”

“Be prepared to model how to use the toilet haha. You probably already have an audience with you anyway though.

If you can, try and teach wiping their own bum at the same time. It makes things so much easier down the track, especially when they start Kindy.

A rewards chart with stickers or an immediate reward like a lolly from their own special lolly jar is a great incentive to go and try. We offer 2 skittles for a wee, 3 if she gets up and takes herself without a reminder, and 4 for a poo, but apparently we’re generous haha.”

Some great advice. Thanks MoM’s for sharing!

What advice would you offer?