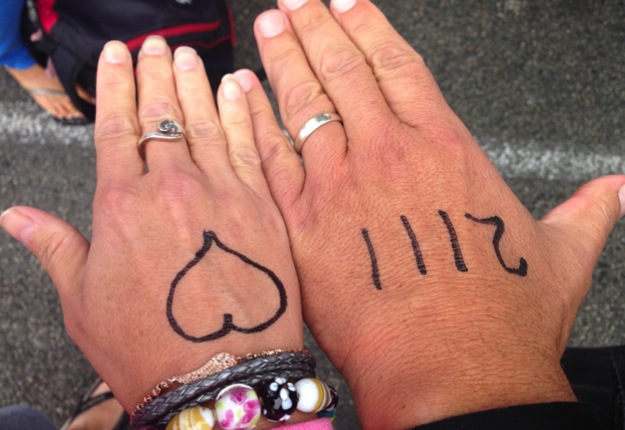 My husband died six months ago. This is my grief journey.

Charles died suddenly in an ocean swim on 22nd February 2015. He died exactly five days before his 52nd birthday and seven days before our first wedding anniversary.

Charles was one of the fittest men I have ever known. As a competitive swimmer, I swim with “the boys” (though none of them are really young enough to be called boys anymore) in the fast lane. And, as a Personal Trainer I know fit. Charles was fit. He trained hard, harder and longer than anyone else. When the set had finished, he’d stay and do another kilometre. He did the worst kick-sets with a smile on his face and there have been sets that I’ve swum with him that have left me broken and crying into my goggles.

When we were in the UK and Paris last year to visit my family, if we didn’t find a pool every couple of days he would get very grumpy. He was quite literally like a fish out of water.

Swimming pretty much ruled in our household. Charles and I met in the pool, training length after length, and kilometre after kilometre side by side.

Back in the early days, before we lived together we would both be at the pool at 5:30am. He called me “Chatterbox” and his “Sunshine” because even at that unearthly hour I was always smiling and talking animatedly.

We shared a passion for the water and for racing. We had “holidays” that were spent racing wherever Nationals was being held that year – Adelaide, Sydney, Rockhampton…and we spent the summer in the ocean competing in the Great Victorian Swim Series (GVSS). The swimming community here knows us as a swimming-obsessed couple and the fact that we went to almost every meet, won medals and appeared on the podium only added to the notoriety. We even featured in a Valentine’s Day article in The Age a couple of years ago. 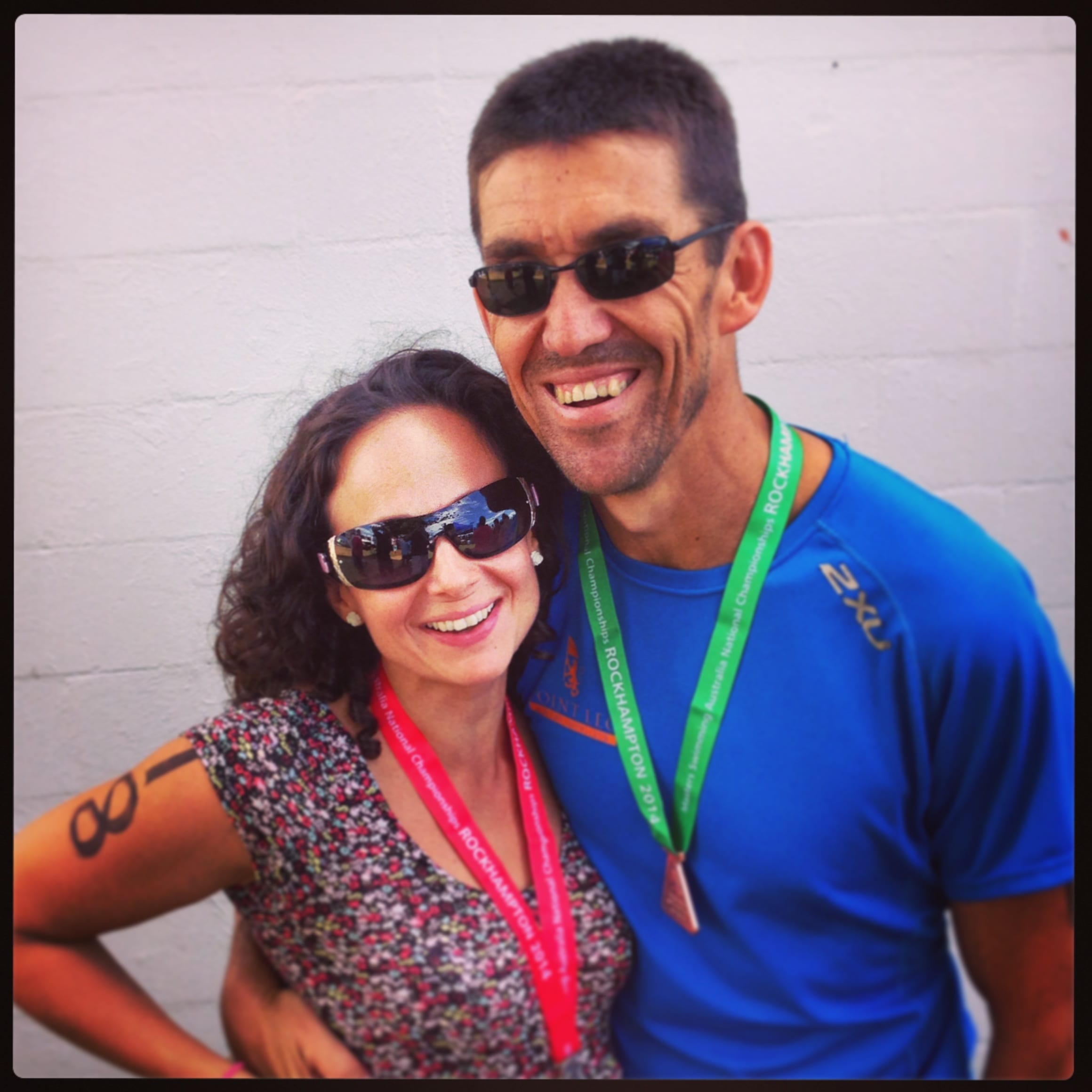 Charles swam every morning as soon as the pool opened, and then again at lunchtime or after work if he could get away with it.

I have two little children (from my first husband), which meant once we started living together my training had to fit in and around school runs and work. When Charles would get home and ask me how my swim had been that day and I answered “I didn’t have a chance to get to the pool today, too busy with the children, work, housework and food shopping” he replied, “don’t worry about doing the food shopping, you need to train.” That was just how it was. He could be pretty blunt and pretty tough.

When he got home he would stretch and do strength work and stretch some more before eating, sleeping and then getting up at 4:26am to start all over again. That was Charles. That was our life. Coming second to swimming was a position I was used to.

This last summer ocean season was a little bit different for us because I had bilateral hip surgery in December and so knew I would be on crutches and out of the water for the GVSS and wouldn’t be competing. It had been a pretty tough decision, having the surgery and knowing that I wouldn’t be racing.

Charles of course was still going to race and I was going to be chief cheerleader from the beach.

Charles died during his last ocean swim of the season. The day before he had swum at Cerberus/Half Moon Bay, and had an amazing swim to almost beat his training buddy, good friend and toughest competition, Francis Christian. As ever Charles lost that race running up the beach! But it was a great swim and Charles was feeling great that night. He wanted fish and chips for dinner – fish made by me, but chips from the chip shop. He stretched, ate, stretched and slept. 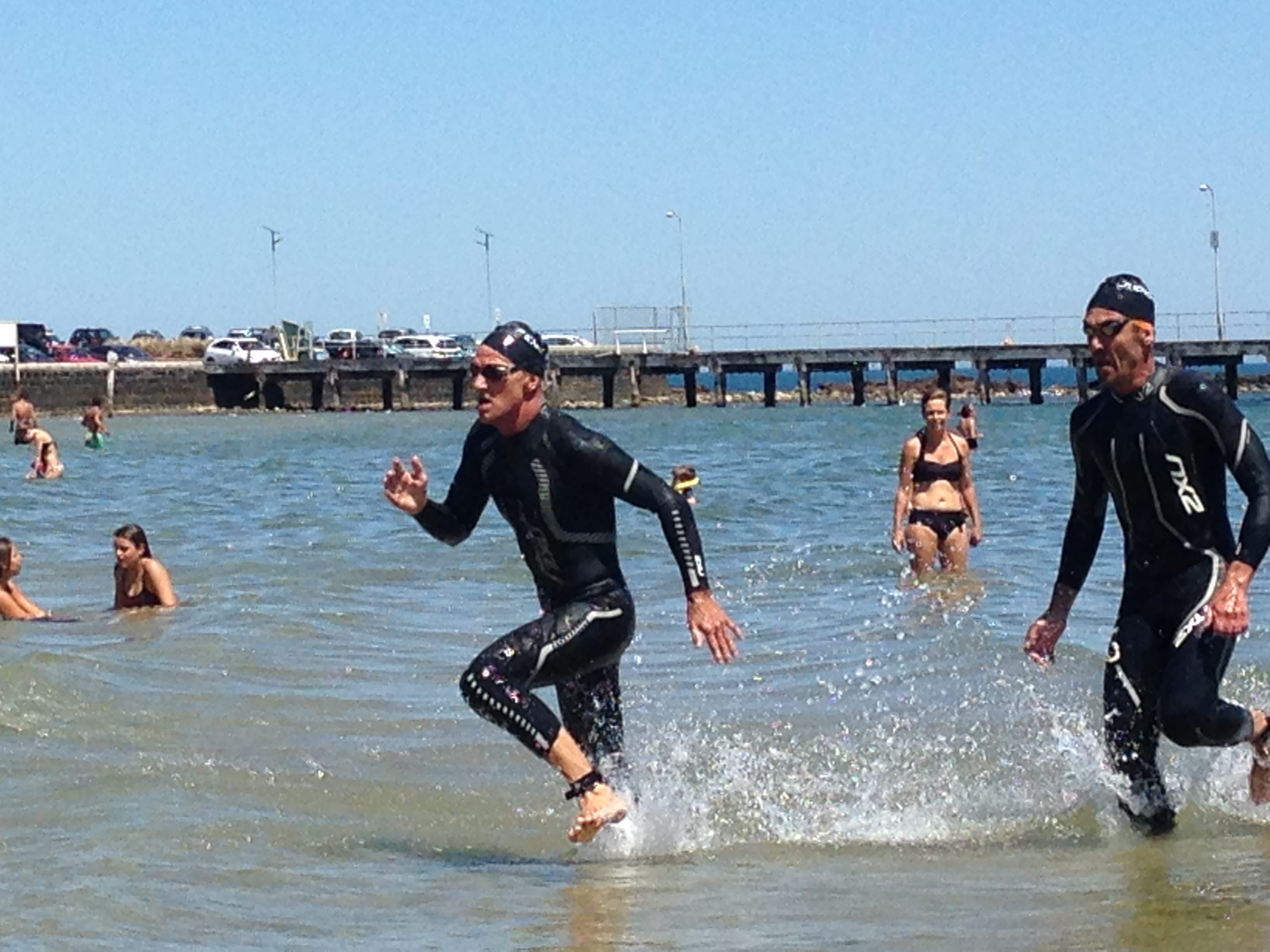 The next morning we got up and along with the little ones and our friend Glenn Wilson drove to Sandridge Surf Life Saving Club, Port Melbourne for the start of the Jalna Big Bay Swim. This is an usual swim that Charles and Glenn both liked to do (but I never have) where they start at Port Melbourne and swim across the shipping channel to Williamstown. Meanwhile I drive round and try to get there before they finish. 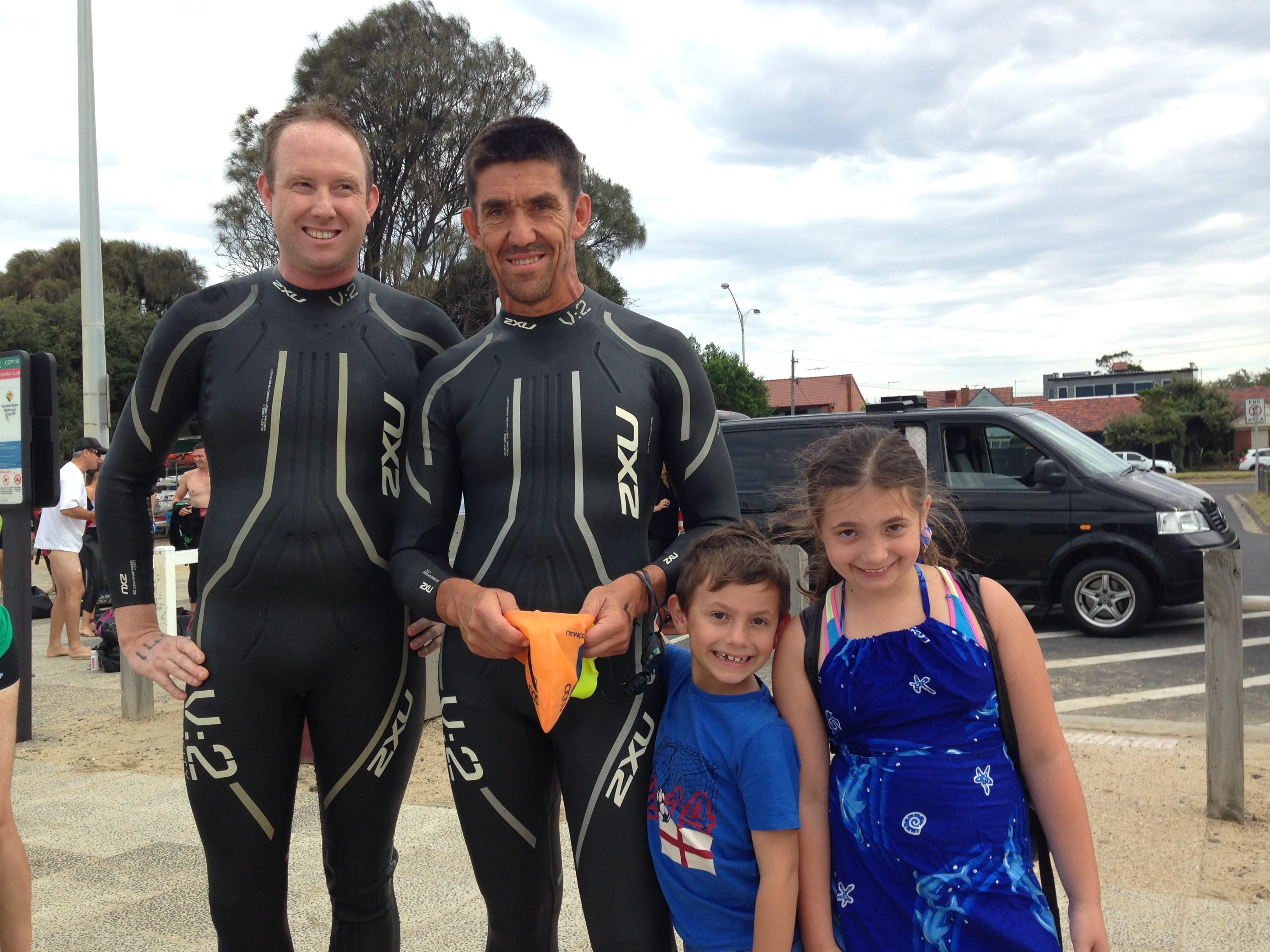 This time I didn’t make it in time to see the surf lifesavers bring Charles in on a RIB. I did see the ambulance arrive minutes afterwards. It actually followed the children and I up the road as we rushed towards the finish after struggling to find a park and get a hurried muffin and croissant for the their breakfast. I remember saying to the children, “Oh, I hope that ambulance isn’t for a swimmer.”

It was for Charles.

And after an hour of trying to restart his unresponsive heart the ambulance left again, empty.

To say it was horrific would be an understatement. I have relived that day more times than I care to remember. The shock. The wailing and screaming. The devastation, the loss and the realisation that he was gone and I would never swim with him again.

That was six months ago and a lot has happened in that time.

I don’t want to rant about how important it is to have a will because it sucks when you’re left behind to deal with everything when there isn’t one.

I want to talk about hope and fresh starts and new beginnings. I want to explain how in the middle of all the craziness, the unending scary black night, I have found myself.

I have lost count of the times that I have been told that grieving is an individual affair. That everyone experiences it differently and copes differently. And that whatever I want or need to do is totally fine.

I have coped the only way I know how. To keep on living, moving forwards and embracing all that I can about life. Not because Charles would have wanted me to but because that’s my way, that’s the kind of person I am. I am not the sort of person to curl up in a ball and give up. I have two children who need me, I have an awesome business to run and grow and I (hopefully) have a whole lot of life left to live. That’s not going to happen from underneath my duvet. 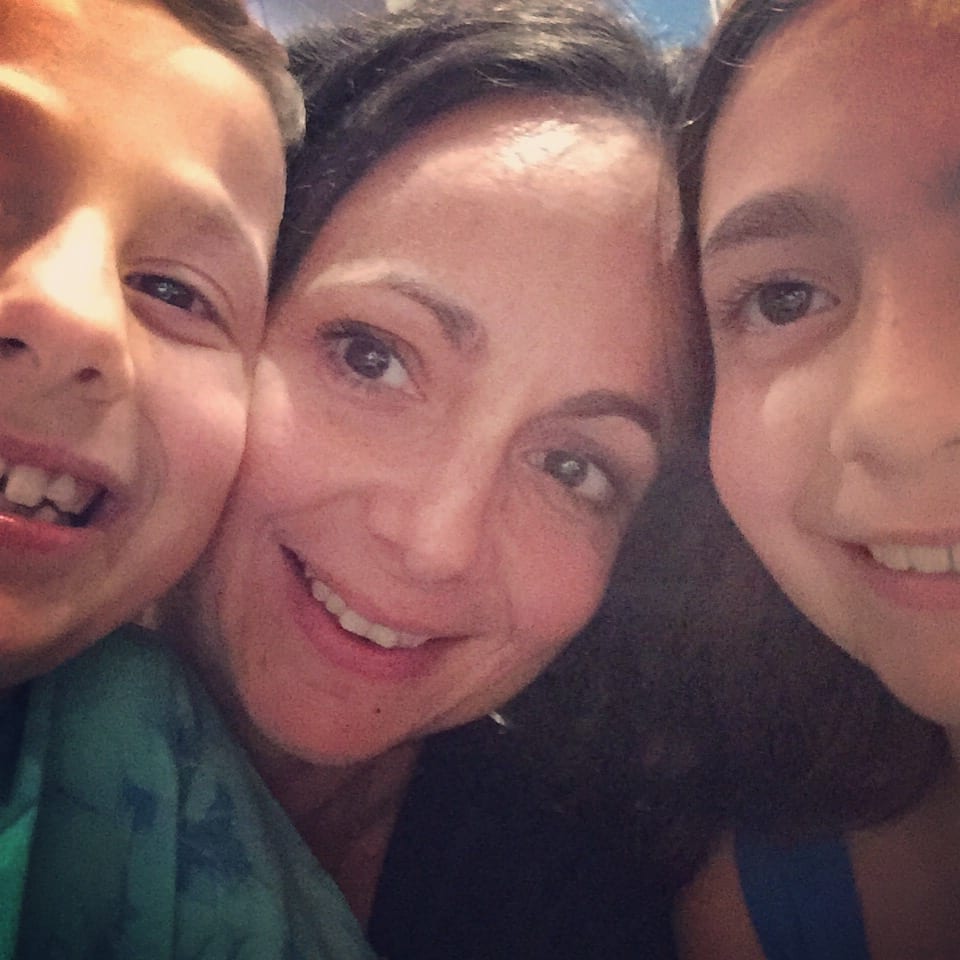 I want to say that it’s ok to move on.

Grieve, yes. Cry, absolutely. Accept the pain and the loss. Lie awake night after night, maybe even sleep on the couch for 4 months. Then move on. It’s ok to move on.

I have spent hours and hours thinking about my life choices that have lead me on the path that has resulted in me being a widow at 39 years old.

It would be easy to say that I wouldn’t change a thing, but I think that wouldn’t be the whole truth. There’s plenty I would do differently. But that would mean that I’d have missed out on some important life lessons and those lessons are lived through to be learned from.

I have recently entered into a new relationship.

It absolutely wasn’t part of the plan and it really did just kind of happen. In the midst of all the chaos and mess and tears it happened. It very nearly didn’t happen because I was so worried about how people might judge me, about how they might judge him, and how on earth could someone want to be with me given all of my baggage?

It may be a well-worn cliché but life is indeed too short for regrets and I know that better than a lot of people.

Happiness is one of life’s blessings and can be so very fleeting – in my humble opinion it should be seized whenever possible.

Back to those life lessons…I have learned that I will never again settle for anyone who doesn’t build me up, back me up and lift me up. I deserve to be with someone who enables and encourages me, someone who makes me want to be a better version, if not the very best version of myself.

Losing Charles has been incredibly hard. Every fibre of my being has been stretched and challenged, broken and rebuilt.

Losing him has also given me the chance to start from scratch, to write a new chapter and create a different end to my story. And write it I will.