Article Have you noticed the formula shortage again? 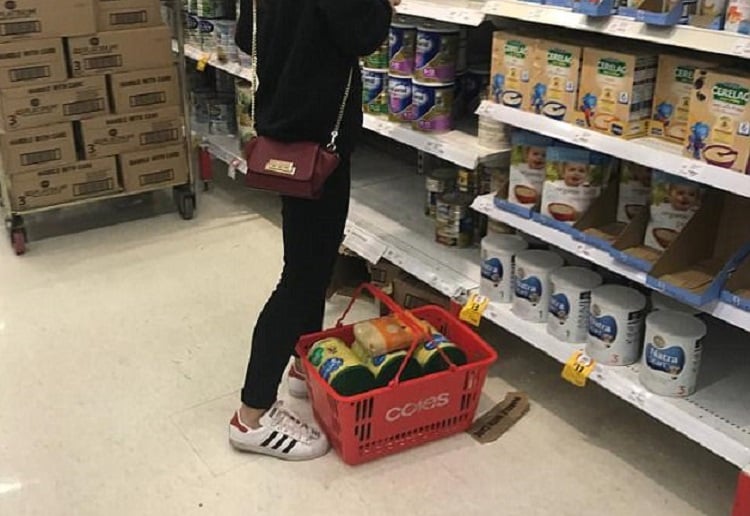 A shocked mum witnessed an ‘organised ring’ of shoppers stocking up on baby formula by sneaking dozens of tins through the check-out at her local Coles supermarket.

According to the mother-of-two, at least 20 customers were smuggling more than four tins of the coveted formula through the self-serve checkouts at the supermarket in Broadway, Sydney’s inner west, reports Daily Mail.

‘Not to exaggerate but there would have been easily 20 individuals purely buying formula that night – in that one hour. Seriously they were everywhere – no wonder staff can’t keep up!’ she told Kidspot.

“Even the security guard was saying it’s a daily occurrence that they have to escort people out and strip formula at registers when they refuse.”

Both Coles and fellow supermarket giant Woolworths have enforced a limit per customer for baby formula after demand skyrocketed overseas which led to an alarming shortage in Australia.

In 2015 the baby formula shortage epidemic hit breaking point after it was found Chinese nationals were being recruited to buy it in bulk and resell it back in China on the black market.

Stores were forced to introduce country-wide customer limits for the formula as the shelves ran dry and Australian mothers were left without nourishment for their infants.

As far back as December 2015 it was reported that Pallet loads of baby formula were being guarded and secretly transported as parents around Australia desperately try to get formula for their babies. Read more on that here.

In November 2015 we shared that a mum doing her shopping at her local Woolworths was shocked to discover a group of four adults had filled two trolleys with formula while another woman stood guard over the three cartons on a crate. They were purchasing the lot and leaving locals yet again fighting for supplies. Read more here.

Have you witnessed anything similar?