Article Huge Uproar As Man Burns ‘$16,000′ Worth Of Caramilk Chocolate 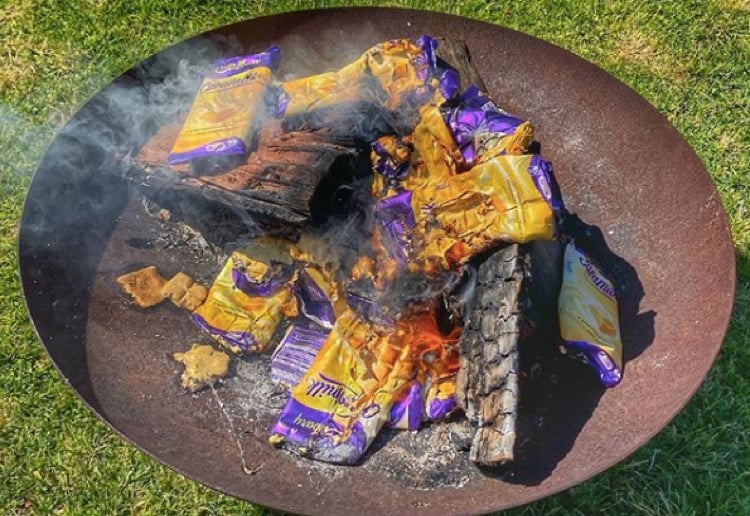 It’s the chocolate that created a cultish frenzy that we haven’t seen before. Cadbury’s Caramilk, came, went and then was re-launched again, spurring thousands of facebook groups, recipes and excited fans.

But it seems that not everyone is enamoured with the famous caramel-flavoured chocolate block.

Bruno Bouchet, who happens to be Kyle Sandiland’s manager, has dived deep into oozy Caramilk controversy by setting an entire box (16 bars) of the golden chocolate on fire.

Bouchet shared his latest stunt on his Instagram page saying:

“I burned $16,000 worth of Caramilk chocolate because no human deserves the pain of eating it.”

And just in case you were wondering, Bouchet reached the $16,000 total, as it has been recently revealed that single blocks are selling on eBay for over $1,000 a pop.

Bouchet chatted to news.com.au, saying:
“I burned the 16 blocks of Caramilk because I wanted to take this horrific product off our streets. If I can save one person from having the disgusting experience I had, then I’ll die a happy man.”

“What makes Caramilk so terrible is the lack of flavour and it’s plastic-like texture. Where’s that love, passion effort that Cadbury put into the Marvellous Creations range? Caramilk lovers are simply sheep who are led to believe they love the product when in actual fact they’re falling for the oldest marketing trick in the book: ‘limited edition’.”

“I’d rather bite into asbestos, this is horrible. No human should ever have to endure the pain of eating these.”

But this stunt has not won Bouchet many fans with comments describing him as a “monster”.

“Noooo!!! I can’t support this at all! Its nearly a crime to waste all that beautiful chocolate,” read one comment.

“This has caused me so much pain,” said another.

Others were shocked about the wastefulness of his actions:

However, some fans were surprisingly supportive of this brutal gesture.

“To be fair. It’s super overrated and I’m pretty sure full of msg,” said one.

“hahahahaha the best you ever done it!,” said another, who clearly shared Bouchet’s somewhat warped sense of humour.

“I’m sure there’ll be some outrage, but it’s important to know I did this to protect people’s tastebuds. You may be angry with me but know that my motivations were good and honourable.”

Remember That Pegs On Or Off Debate?

Bouchet is no stranger to controversy, recently getting into a good old argument with his wife whether to leave pegs on or off the washing line.

We completely get that some Caramilk connoisseurs are disappointed in the newly relaunched chocolate, but we’re not sure if this is a good enough reason to burn it to ashes?

I burned $16,000 worth of Caramilk chocolate because no human deserves the pain of eating it. Full video review (and subsequent burning) in bio ????????????

Do you think Bouchet went too far in his stunt or do you see the funny side of it? Tell us in the comments below.