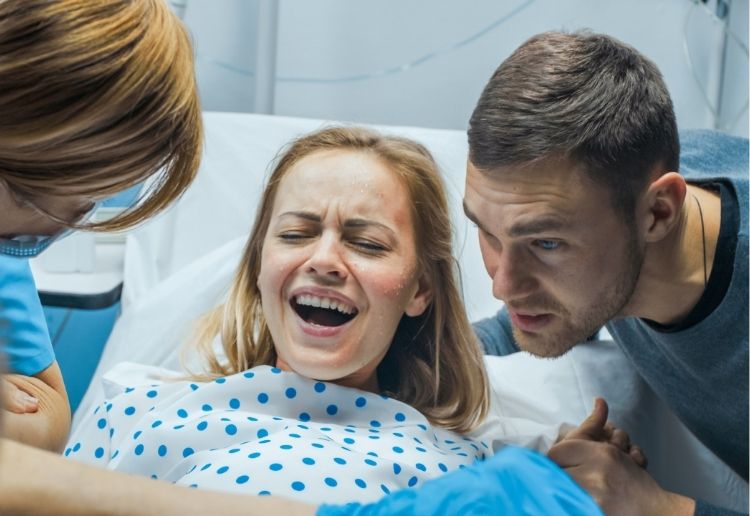 A new mum has been left mortified after her husband humiliated her in front of his entire family by joking about her ‘embarrassing’ birth experience.

The 25-year-old first time mum says her birth experience was ‘pretty traumatic’ as she had no idea what to expect. She says labour was the most difficult time of her life, and she was in pain for hours.

Initially her mum was by her side, but when she left her husband remained with her throughout the labour. It was while he was supporting her that she did something almost every labouring mother does – she had a bowel movement.

“I did something so embarrassing in the delivery room, I pooped myself which was unexpected,” she explained on reddit. “It was embarrassing and although my medical team were very professional about it, my husband couldn’t help himself and started laughing about it later.”

She says her insensitive husband even told her family, who didn’t bat an eyelid.

“In fact, I found it embarrassing and I already told him to stop bringing it up especially when he started joking about getting me diapers for my “opsies!!” It got really tiring and chipped away from my self-esteem and confidence.”

‘I literally just lost it on him’

“We were with his parents celebrating new year’s eve together when I excused myself to the bathroom. While I was getting up he made a quick remark and said, ‘Oh yeah, you should go quickly because we don’t want any accidents just like the one we had at the hospital, you know what I mean?’ While winking at me. His family actually laughed and BIL commented, ‘Good one!'”

Understandably, the new mum couldn’t take it any longer, and unleashed on her husband.

“I was astonished and so angry and ashamed, I literally just lost it on him and yelled at the top of my lungs calling him a cruel insensitive jerk to be using the difficult experience of birthing his child as a joking matter and humiliating me in front of everybody. He was shocked, staring back at me and not saying a word.

“All went silent and I just stormed off to the bathroom until we left and that was when he snapped saying I messed up by talking to him like that in front of his family during dinner. I said I couldn’t hold my tongue for that long and after he kept joking about an embarrassing thing when I told him to stop. He said he was just joking and I went overboard with my reaction and also, I should’ve sucked it up and waited until we got home so we could address this privately and I could even yell at him as long as I wanted.

“We argued about it after we got home and he kept saying I humiliated him in front of his family during the celebratory evening by being petty and trying to one up him. He even said I should’ve laughed along not fly off the handle like that. Did I overreact?”

What do you think? Should the new mum just have ‘sucked it up?’ Let us know in the comments below.