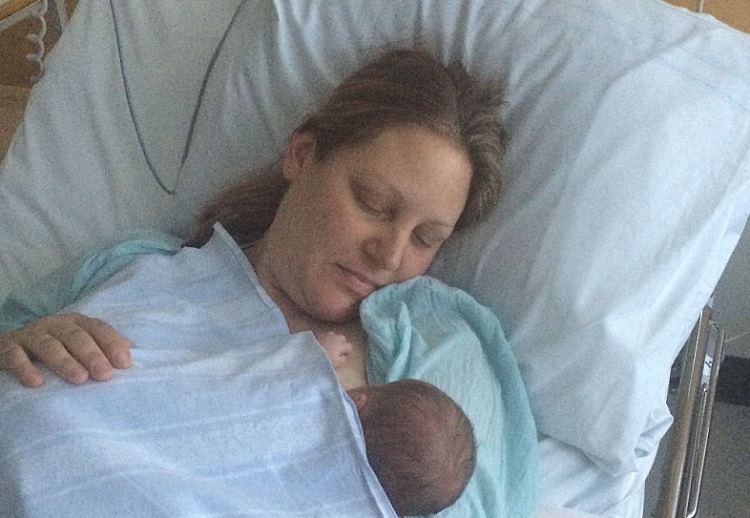 Cash-Douglas, is one of the first children in the world to be born after a successful womb transplant.

Lolita Wästerlund, 36, from Sweden, was born without a uterus after suffering from a rare medical condition. In a pioneering operation, she was implanted with a womb donated by her sister, who had already given birth four times. Lolita then underwent IVF with her own eggs and her partner’s sperm, and astonishingly carried her baby to term just over a year ago.

In an interview with MailOnline, Lolita and her sister, Linda, told of their incredible joy at the ‘miracle’ of Cash-Douglas’s birth and described their hope that the experimental surgery will transform the fortunes of other women suffering from the condition.

‘My life has taken a new turn, I am so happy. Just looking at him makes me smile,’ Lolita told MailOnline. ‘I still have a feeling that this is unreal… It should not have been able to happen, but it did.’

After spending her late teens and early 20s in and out of depression, Lolita met her now-husband, Patrik Carlerup, a carpenter who instantly put her at her ease by saying children were not a priority for him.

‘Me and my husband talked about adopting. But we never really felt like it. I guess the sorrow of not being able to have a child made me felt that it was always going to be someone else´s child. I have full respect for those who are adopting, but it was just not right for me’, says Lolita.

But then, in 1999, Lolita’s mother read an article about womb transplant research that was being carried out at Sahlgrenska University Hospital in Gothenburg.

The sisters immediately contacted Professor Mats Brännström, who was carrying out the research.

‘We said that we were ready to try when it became a reality,’ recalls Lolita.

‘We have never even had a discussion about me having her uterus. It was just something that was totally obvious for us.

‘I never asked Linda if I could have hers; she was the one who wanted to help me. If she had not wanted to donate, this would never have happened.’

However, it was more than a decade before the procedure became a viable option (a previous attempt, in Saudi Arabia in 2000, resulted in the organ being removed).

Then, in 2011, scientists invited nine women, including Lolita, to a meeting in Gothenburg to share the exciting news – explaining that they were ready to transplant if they had suitable donors. For Linda, who already had four children at that point, the decision was obvious.

‘The biggest thing for me was to help my little sister with her life long dream. I am blessed to have been able to done so’, says Linda, who had already given birth to four children by then.

After ‘hundreds’ of checks, blood tests and X-rays – as well as consultations with a psychologist – Linda’s uterus was transplanted into her younger sister on 16 March, 2013.

Lolita says: ‘Linda was under anaesthetic for about 12 hours. They needed to take a lot of tests to be absolutely sure that her uterus was suitable. Then they operated for about six hours to get inside me.’

It was a gruelling 12 months after the operation until Lolita was able to try for a baby; doctors were anxious to make sure the uterus was in good enough health.

The following year, the process began. Lolita had a total of ten embryos injected with Patrik’s sperm – an emotionally draining process which saw the first five die within the first few weeks.

‘It was a very nervous time for us both,’ Lolita recalls. ‘We tried again and again, but it did not work. I could see how the eggs was getting smaller and smaller in the freezer.’

Finally, in Autumn 2014, the sixth egg ‘stuck’. An emotional Lolita recalls: ‘The miracle had happened, I was pregnant.

‘I took the test and saw that I was pregnant. But my husband was at work and I didn’t want to tell him over the phone.

‘It was late when he finally came home, and I had gotten really upset and told him to sit down with an angry voice. After I told him the good news, he admitted he thought I was going to break up with him.’

Despite being overwhelmed with joy, Lolita admits she could not relax during the pregnancy, fearing something would go wrong and never truly allowing herself to believe that there was a baby on the way.

‘I had to go to Gothenburg every two weeks during the pregnancy. There were ultra-sound scans to see that everything was going in the right direction. I realise that I have gotten a VIP treatment during my pregnancy. That this is not normal. On the other hand, nothing was normal about this miracle.

‘I only came to realise that I was actually going to have a child just a few weeks before he was born,’ she says. ‘Before that, there was always the uncertainty whether this was going to work. It had never been done successfully before.’

Lolita was scheduled for a caesarean in Stockholm at 37 weeks – but it was brought forward by three weeks after she suffered preeclampsia.

‘I was of course very nervous giving birth a few weeks early. But the operation went fine. In an indication of the daze that Lolita was in, she says the first thought that came into her mind was the appearance of her baby’s nose which had seemed somewhat oversized during the ultrasound – something she now readily laughs about.

‘He did have a normal nose,’ says Lolita, saying she was overwhelmed as she looked at the ‘happy little boy’ who weighed just over 3 kilos (around 7 lbs).

‘The process has been hard, but it was of course worth it. I still have a feeling that this is unreal, it is something that is hard to get a grip on, because it should not have been able to happen.’

Giving hope to others – you are not alone!

‘Our story is important for all the 14-year-olds out there who get the same reply from a doctor that I did.

‘Firstly, you are not alone with this problem. The feeling that you are not a woman, there are others that are suffering from the same syndrome. Secondly, because of the research being done, there is hope.’

Linda adds: ‘I have not been affected in any sense by removing my uterus. I had already given birth to four children and felt that it was enough. The strange thing is that I feel more feminine now than ever.

‘I have blossomed out as a women and I am much more determined with what I want to do with my life.’

Lolita would love to have more children but is unable to do so because the drugs she took damaged her kidney and the uterus had to be removed.

But she is determined to share her good fortune in the hope that others could benefit. ‘My story shows that there is hope. I prayed to God for a womb in 1994. Nineteen years later I got one, I was pregnant a year after that. There is hope for women who are born without a uterus.’