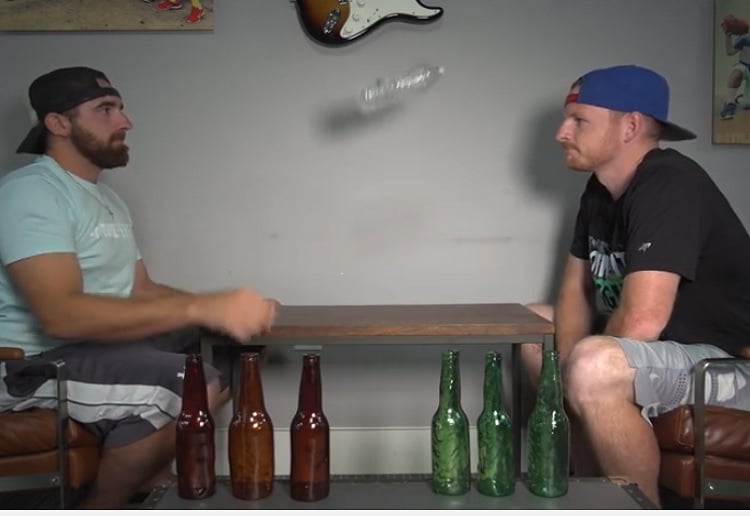 A school has been forced to ban water bottles because of a new craze where pupils attempt to flip them upright.

We shared details yesterday about the bottle flipping craze that has lit up the internet recently and has led to teenagers across the country filming their attempts on phones and sharing them online.

It involves trying to flip a partially-filled bottle plastic bottle and getting it to land upright without falling over.

Kids are particularly excited if they can get the bottle to land in a difficult spot such as a wall.

But the obsession has led to one school issuing a ban on plastic bottles being carried around by pupils, reports The Mirror. Teachers are fed up with picking up extra litter at Fulston Manor School in Sittingbourne, Kent.

Headteacher Alan Brookes sent a letter to parents which said: “We have suspended the taking of water bottles around the site in order to avoid problems created by litter, messing about in lessons and pupils indulging in the current craze of flipping bottles with all the intended and unintended consequences this produces.

“Pupils can still drink in house areas before school, at break-time, at lunchtime and after school, ensuring that there is no prospect of them becoming dehydrated.

“They are also permitted to take bottled water with them to PE and Games lessons.

“At the end of the first day of this pilot scheme there was a marked reduction in litter around the site, no issues involving water bottles and, despite initial concerns expressed, very few pupils observed drinking water in any of their breaks within house areas, apparently reinforcing the belief that most carry bottles around out of habit or to provide distraction rather than because of a need or desire to drink.
“As with all such pilot schemes, the impact will be assessed over time, but initial impressions are extremely favourable.”

The ban has not been universally popular, with some critics accusing the school of being overly harsh.

The feedback we received yesterday when we shared details of the challenge reflected that parents are just as fed up. Wonder if we will soon see a ban in Aussie schools.