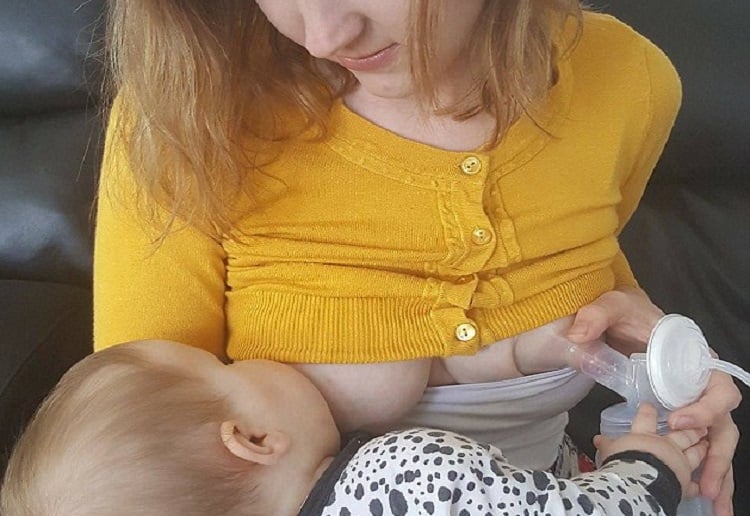 Meet the young mum of two who produces around two litres of breast milk each week, much of which she then donates via Facebook to other mothers who need it.

‘My eldest, Billie, was just a few months old at the time and even though I was finding it a struggle to fight exhaustion and all of the postnatal changes, I told myself once things had settled down I’d look into it.

‘I knew I was fortunate enough to have a plentiful supply.’

Ms Brinkworth told Daily Mail Australia it wasn’t until the birth of her second daughter, Margot, that she was able to get around to properly researching donating her excess breast milk.

‘Breast milk supply meets demand for most women,’ she said. ‘But others are not so fortunate and so are forced to supplement with formula or donor milk.

‘I’ve witnessed first-hand friends battling with low supply, and the heartache and guilt they felt over the need to supplement.

‘When I had Margot, I was determined to pump any milk I produced excess to my needs so that I could donate, rather than encouraging my supply to meet only the demands of my own two children.’

She produces around two litres of breast milk each week, which she then freezes and gives to other mums.

‘I don’t want to see my milk being wasted,’ she said.

‘Why not help provide the best possible nutrition for another child if I know I’m easily capable of doing so?’.

She posts on her local Human Milk 4 Human Babies Facebook page in Canberra, and then donates to whoever gets back in touch.

‘So far, I’ve donated to a friend who is living in Sydney and who travels down regularly for around three hours there and back to collect my milk.

‘I’ve also donated to a premature baby which was amazing. There are only five milk banks in Australia, none of which are in Canberra.

‘Breast milk is a life-saving substance and is so sought after and appreciated by recipients as it’s hard to come by.

‘Some people are scared off by the risk that the donor could have HIV or other blood-related diseases, but all women have their blood screened for these conditions during pregnancy and most donors will happily supply a copy of their results.’

‘I’m currently spending about 30 minutes a day expressing, cleaning bottles and pump parts, as well as storing my milk.

‘For that small amount of effort, I’m producing around two litres of milk each week, which is a pretty decent amount.’

She says that she isn’t interested in selling milk, and adds that it is illegal in Australia for good reason, but maintains: ‘I’m proud to be able to contribute to providing healthy, immune-boosting human milk to another child.’

Thousands of women in Australia and around the world utilise the groups on a daily basis in order to get in touch with donors and meet up and trade breast milk.

The Human Milk 4 Human Babies Facebook group started up in October 2010, has more than 75,000 followers of its global network and more within its smaller, area-based groups.

Have you ever looked into donating your breastmilk?