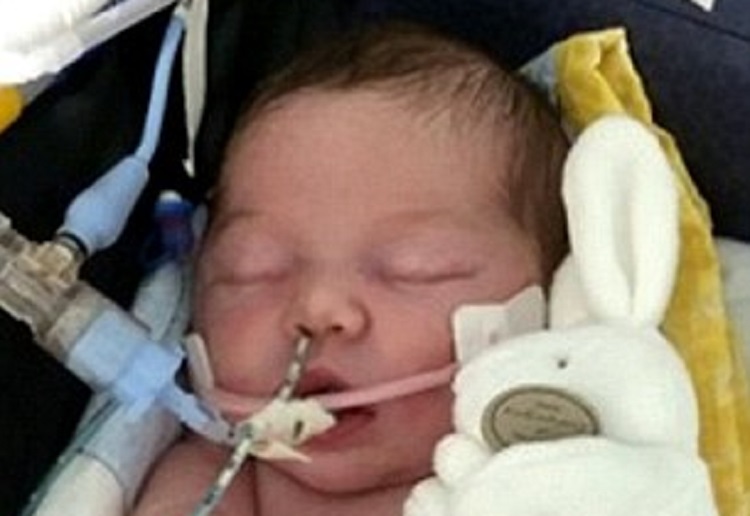 A mum sadly lost her newborn baby girl after two midwives failed to spot an umbilical cord was choking her baby during delivery.

Karen Higham-Deakin lost her 12-day-old daughter after complications during birth meant the unborn child was starved of oxygen for 30 minutes, reports Daily Mail.

The umbilical cord was wrapped around her neck, but despite a low heart rate and the positioning of the cord, two midwives failed to call upon the services of a pregnancy doctor.

Coroner John Pollard said the care given to Thea and Karen was ‘sub-optimal’ and ‘errors were made’ as delivery staff failed to flag up the deteriorating signs to an obstetrician.

One midwife at Royal Bolton Hospital, Greater Manchester, had only six months experience and the other midwife had only worked one shift at the same hospital.

The Coroner, John Pollard, said that if Karen ‘had been  escalated and an obstetrician had put her on monitoring and Thea delivered in 10 or 15 minutes, the outcome might have been different’.

She said on delivery the umbilical cord was around Thea’s neck, but was ‘loose enough to slip over’ her neck. Thea suffered severe brain damage and died 12 days later.

Patrick Forbes, a consultant at Addenbrooke’s Hospital in Cambridge, was asked if he was critical of the decision by the midwives not to escalate care to an obstetrician.

He agreed with Bolton NHS Foundation Trust’s representative James Down that it would not have been ‘unreasonable’ to do so.

Speaking about the case, mum-of-one Karen said: ‘A number of opportunities were missed which we believe would have led to us taking our baby home.

‘We asked for the inquest – nor was it to attribute blame, it was to make sure practices were looked at.

‘I feel we trusted the staff at the hospital, the midwives and the Trust as a whole to do the best they could.’

Karen, who has since given birth to a baby boy called Austin, added: ‘They were there to ensure that me and Thea were okay – but it was proven they didn’t do that.’

The coroner said there was no neglect from the midwives – but the staff members should have called upon a obstetrician, a pregnancy doctor, which they didn’t.

Coroner John Pollard said: ‘It is quite clear that certain errors were made, the care could be described as sub-optimal.

‘There was no evidence of anyone deliberately doing anything to cause mistreatment – there wasn’t any evidence of a really bad standard of care.

‘The law is very clear, unless it can be shown that with further intervention her life would have been saved, I cannot conclude there was neglect.’

In a narrative conclusion, Mr Pollard said Thea died from natural causes after the compression of the cord in the womb led to severe deprivation of oxygen to the brain, leading to hypoxic-ischemic encephalopathy, or HIE.

He said that the cord was around Thea’s neck before she was delivered at around 12.30am – but the warning signs were there at 12.05am.

Mr Pollard said: ‘The only significant thing would have been to try and deliver her as soon as possible and an episotomy, would only have been help if the head was presenting, even then the outcome was not guaranteed.’

Trish Armstrong-Child, director of nursing and midwifery at Bolton NHS Foundation Trust, said lessons had been learnt from the ‘very sad’ death of baby Thea.

She said: ‘Only someone who has been in the position of Thea’s parents can truly understand their pain, but on behalf of the hospital, I would once again like to give them our deepest condolences on the loss of their baby girl.

‘There have been lessons to learn from this very sad event, and we have reviewed, updated, revised and audited relevant policies and record keeping so that the way in which mothers and babies are monitored is of a consistently high standard.’

Such a tragic story, our hearts break for this family