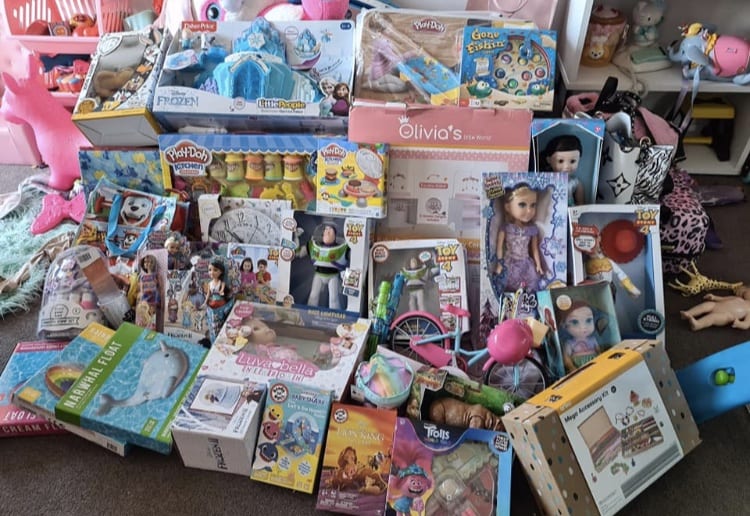 Buying Christmas gifts is a very personal thing. Some families have the tradition of giving one gift per kid, while others save up throughout the year and splurge on mountains of presents. One mum has come under fire for going completely overboard on her festive gifts for her young daughter.

This super-generous mum probably didn’t expect the reaction when she posted pictures on social media of the thousands of dollars worth of Christmas gifts she has been accumulating for her two-year-old. While some comments were kind, many were quite vicious, slamming the mum for spoiling her child and going completely overboard on the festive loot.

The photos showed a mound of Christmas gifts, that any kid could only dream about. There were Barbies, dress-ups, a Frozen castle, craft, inflatables and so much more. I even spied a Luvabella amongst the pile, which costs around $100 and has been on my kids’ list for ages (I’ve always refused as the thought of spending 100 bucks on a crying, peeing doll really irks me).

The mum also said that her Christmas shopping was not over and she still had put aside “dolls, bike, those horse things, trampoline, paw patrol ride on, some my generation dolls and things to go with them, like the picnic table and dog house, the barbie dream house, a few barbie sets and other stuff” on layby.

“My Christmas stash for little miss 2 and still have about $1,500 in laybys to pick up. Love u my little princess,” the mum wrote on Facebook.

Some reactions were oozing Christmas spirit:

“I love it! go mumma. They are only little once,” said one.

“You’re a very kind and generous mum and lucky to be able to buy your daughter so much,” said another.

Others were impressed at how organised the mum was, with weeks still to go until Christmas.

Of course, there were bound to be negative attacks on Mount Chrismas Gifts.

“That’s ridiculous for a two-year-old,’ one mum said.

“You’re setting her up for disappointment. Trust me,” another commented.

“Yes a full tree looks great but put in perspective- save most of the extravagant money for their education,” one grandmother suggested.

Many mums, however, admitted that they also went a bit overboard on presents. While others have stopped going crazy on Christmas gifts.

“I end up having too much in my house and it’s getting to me so I’ve decided not to buy so much and get them things they are going to actually play with more and use,” said one mum.

“I just look at this and think “christ” ……… not because it’s a lot (not my kid) but the wrapping would do my head in and I love wrapping but there is a limit to my love!” said another.

When Is It Too Much?

We recently posted a question from one of our MoM’s asking our readers whether she had gone overboard in her Christmas gift buying.

While many mums said that she has a right to spend her money as she wishes (“Your kid ; your money), others thought she had gone completely over the top.

“You can do whatever you want but to me $1000 on one child is ridiculous. I have 4 and I do like 200 each, maybe a little more. Not because I can’t afford it but because I feel buying tons of things for my kids for Christmas devalues the meaning of Christmas,” wrote one mum.

“That’s actually ridiculous, spend more time with her and buy less,” said another.

“She’s two. She won’t even know what’s going on. It’s just nuts spending this much on a toddler if you aren’t loaded.”

“Sorry but that’s Not what Xmas is about….within 5 mins your 2yo won’t even care about $1000 worth of presents”

When does a lot of Christmas gifts become too much? What is your guideline amount of spending on festive gifts fo your kids? Tell us in the comments below.