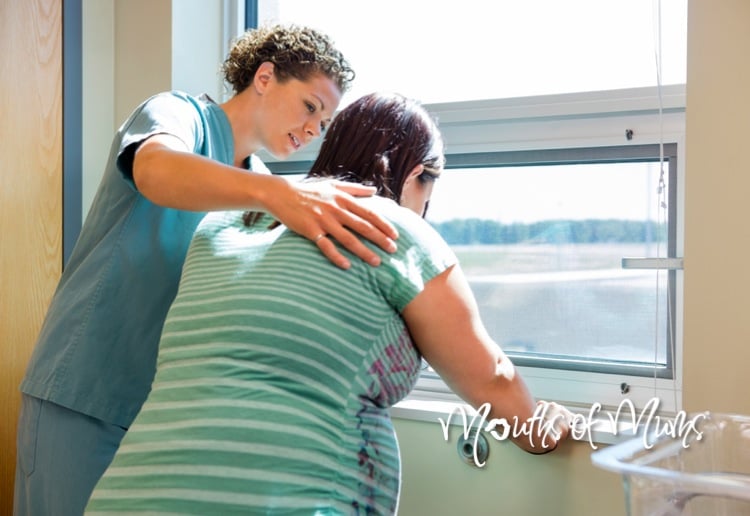 A mother has been left paralysed after a routine epidural went horribly wrong.

Irrum Jetha’s  joy quickly turned to horror after the birth of her baby girl, Amelie, when she realised the epidural she had been given had left her with no feeling in her legs.

Doctor’s confirmed her worst fears only 24 hours after the birth of her daughter: the “routine” epidural had left her unable to walk.

‘The birth itself was a fabulous experience. I was euphoric afterwards. And when Adam cried “It’s a girl” we were both in tears.’

At five in the morning, she was transferred to the high-dependency unit, again as a precaution because of her previous heart surgery.

When, three hours later, she still had no feeling in her legs, Irrum told doctors she was worried. She says: ‘They reassured me it was normal, but I was very uneasy.’

By 5pm the following day, however, she was seriously concerned. An hour later, it seemed the doctors were, too.

Adam, a researcher at Imperial College in London, says: ‘The doctors were now saying that Irrum should be able to get up. I began to get seriously worried because she still had no feeling. Suddenly everyone seemed to be in panic mode. It all became very scary.’

For the first six days of Amelie’s life, her mother was too sick to see her.

Doctors at London’s Charing Cross hospital, where Jetha was treated, say she suffered a rare epidural haematoma – a blood clot that compressed her spinal cord, leaving her paralysed.

“It has been a huge struggle,’ says Jetha of her injury.

“I’m in a lot of pain and I don’t feel confident enough to leave the house in my chair alone. At times I feel so very useless.” 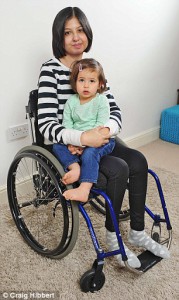 Unable to return to her active job as a scientist in a laboratory, Jetha remains at home, but her paralysis means it’s too dangerous for her to be alone with her daughter.

“Because of my disability I can’t look after her alone, there are too many things that could go wrong.

‘I can’t bath her alone or change her myself. The world that I knew has collapsed and the pain of not being able to care for my little girl is devastating.”

‘There have been so many mother-and-daughter bonding moments that I have missed. And I will never get those back. Every time I see a mother walking with her baby I am in tears.

‘I’ve gone from being an active young wife to being entirely dependent on Adam. Not only does he have to care for Amelie, he has become my carer too.’

She endures five hours of painful daily ‘manipulation’ with a physiotherapist to try to coax some life back into her lower limbs.

A spokesman for the Chelsea and Westminster Hospital said in a statement: ‘This was a very complex, rare and tragic case and we offer our sincere condolences to Mrs Jetha and her family. We have fully reviewed our procedures for post-anaesthetic monitoring and for rapid transfer to specialist units for imaging and neurosurgery. We cannot offer any further comment at the moment as this case is the subject of legal proceedings.’

Childbirth certainly doesn’t come without risks. Sadly only last week we shared the story of the Queensland mum who died after suffering complications from a caesarean section while delivering her first child. And also the mother who died from a  ‘ventricular arrhythmia’ two days after giving birth.

It is always important to do your research so you are well informed of all the possible outcomes. Just in case!

The Mothering shares, the most common side effect of epidurals is a drop in blood pressure. This effect is almost universal and is usually pre-empted by administering IV fluids before placing an epidural. Hypotension can cause complications ranging from feeling faint to cardiac arrest and can also affect the baby’s blood supply. Hypotension can be treated with more IV fluids and, if severe, with injections of epinephrine (adrenaline).

Epidurals can also cause a rise in temperature in labouring women. Fever over 100.4 F (38 C) during labour is five times more likely overall for women using an epidural; this rise in temperature is more common in women having their first babies, and more marked with prolonged exposure to epidurals. For example, in one study, 7 percent of first-time mothers labouring with an epidural were feverish after six hours, increasing to 36 percent after 18 hours. Maternal fever can have a significant effect on the baby.

A large UK study found that women were twice as likely to experience postpartum haemorrhaging when they used an epidural in labour.  This statistic may be related to the increase in instrumental births and perineal trauma (causing bleeding), or may reflect on hormonal disruptions.