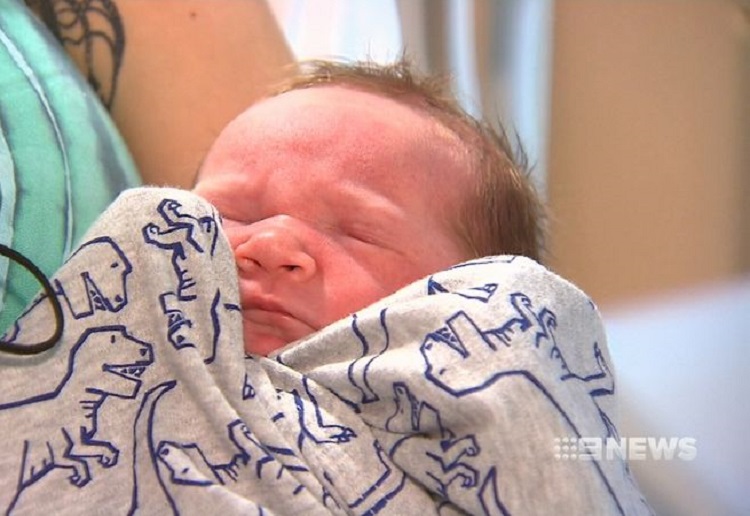 A Perth mum who thought she had a burst appendix has given birth to a healthy baby boy.

Jayde Lawrence and Kurt Stuart had no idea little Jax was on his way.

On Monday the 27-year-old property manager felt what she thought were simply sharp pains in her stomach and, believing she had appendicitis, she raced to hospital, reports 9 news.

It took just minutes for doctors to discover that inside her belly was not a burst appendix, but a heartbeat.

The couple said while they’re stunned, they’re over the moon and have been fielding questions from disbelieving friends and family for the last 24 hours.

Jax’s birth was against the odds – Jayde has polycystic ovarian syndrome, which means for her it’s hard for her to conceive, and there are risks carrying a baby to full term that should be monitored closely.

In the last few months Jayde has taken two pregnancy tests and both came back negative and she had no significant symptoms.

Congratulations guys! What a beautiful surprise.

In a similar story, Charlotte Thomson, now 21, had regular periods and was still slipping into her size 8 dresses so had no idea she was expecting when she went into labour.

It wasn’t until she took herself to hospital with bleeding and painful stomach cramps that medics told her she was about to give birth.

‘My stomach was completely flat, and I’d been having regular periods so it was such a shock when I found out.

‘I didn’t believe that I was actually pregnant until I gave birth. It was scary becoming a first-time mum with no warning.

A midwife performed an ultrasound and told Charlotte she was nine months pregnant and in labour.

Charlotte continued: ‘I panicked that I wasn’t prepared and hadn’t bought any baby clothes. I was so worried about what my parents would say when they found out that I was having a baby.’

Doctors explained that she’d had no bump because Molly had been tucked up underneath her ribs.