Article Mum Receives Note From Neighbour About Her Crying Baby 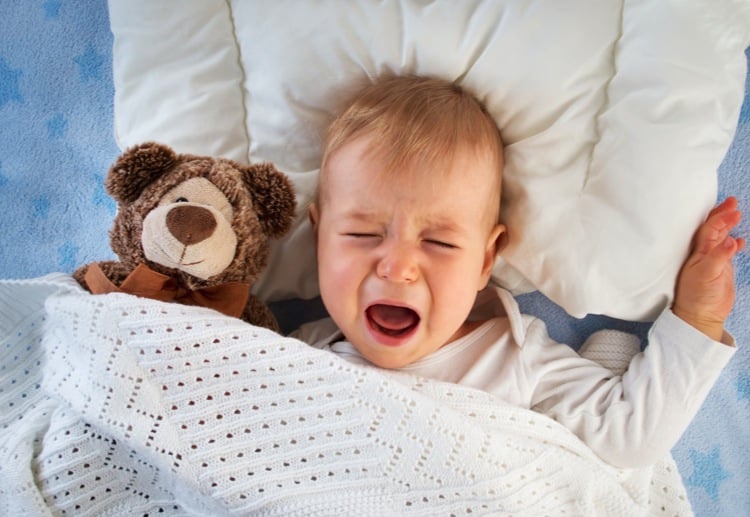 Neighbour writes note to parents asking them to stop their baby boy from crying after 8pm.

The note, which was shared with Sydney mothers’ group Inner West Mums, asked the parents to hush their baby at night because ‘it’s important to get a good night’s sleep’.

‘We couldn’t sleep recently because your baby was crying. We all understand the baby crying, but we usually go to work early in the morning,’ the neighbour said.

‘We don’t mind during the day, but I’d like [your baby] to be careful not to cry for a long time after 8pm.

‘I hope you understand.’ 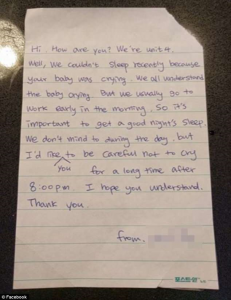 The angered mum shared her post with some information about her child’s sleeping rituals to provide ‘a bit of background’, writes Daily Mail.

She said the child rarely made a noise after 9.30pm, and she never let him ‘cry it out’, a technique used by some parents which allows the baby to cry without intervention.

The mother, from Sydney’s inner-west said she felt the urge to leave a very direct note for her neighbours but did not want to start a fight.

‘I want to leave a simple note saying ‘babies cry’ and attach earplugs [but] my husband wants to explain that he’s jetlagged,’ she said.

‘What would you do to make a statement, but not start a war?’ she said.

Recently we shared how a mother of four was shocked to receive a note from neighbours offering advice on parenting after her kids were making noise in the backyard. Read more here.