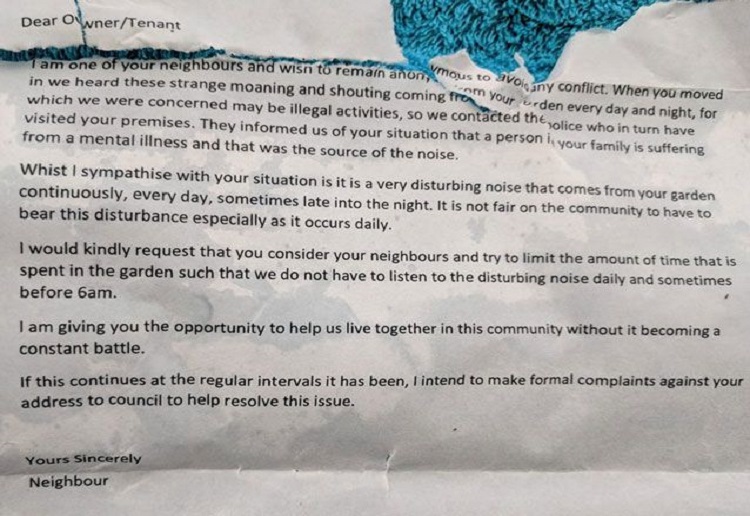 A Brisbane mum has spoken out about a nasty letter she received from her neighbour complaining about noises being made by her autistic son.

The note found in her letter box, written from an anonymous neighbour, reads, “when you moved in we heard these strange moaning and shouting coming from your garden every day and night, for which we were concerned may be illegal activities, so we contacted the police who in turn have visited your premises”, shares 7 news.

“They informed us of your situation that a person in your family is suffering from a mental illness and that was the source of the noise,” it reads. 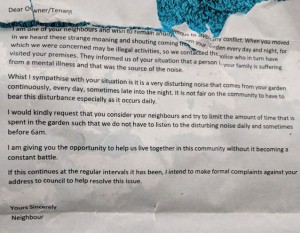 They said they sympathise with the mum’s situation but said the noise is “very disturbing” and comes from her garden “continuously, every day, sometimes late into the night”.

“It is not fair on the community to have to bear this disturbance especially as it occurs daily,” the note reads.

“I would kindly request that you consider your neighbours and try to limit the amount of time that is spent in the garden such that we do not have to listen to the disturbing noise daily and sometimes before 6am.”

“If this continues at the regular intervals it has been, I intend to make formal complaints against your address to council to resolve this issue,” the note reads.

The mum wrote a response on Facebook saying while she appreciates that “the odd noises of a mentally ill person can be disturbing” they have “no clue” what it’s like compared to living with it “24/7 for 17 years”.

“Having three police turn up at my doorstep at 10.30 at night when I’m new to the area may have made you feel you are avoiding confrontation, but for me it was alarming to say the least,” the mum wrote.

“Talking with council won’t help, he’s not a dog, it’s a person. If you’d like to take him on a holiday so I can get some rest that would be awesome. Otherwise, please feel free to come and chat with me, there’s a lot you do not understand.”

The mum added he barely gets out a sentence with more than five words and the noise the neighbours are referring to are him humming and yelping occasionally. He does it as a “calming mechanism”.

She hoped the person who wrote the letter would address the issues with her in person, and added “it’s not okay to control and bully over people”.

I will never understand how some people can be so cruel. This is horrible behaviour. Offering support would have been a much better choice.