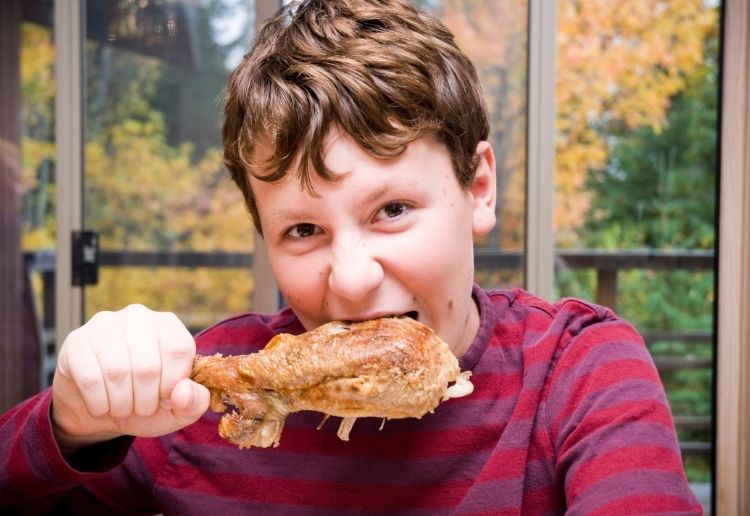 A mum has confessed to secretly feeding meat to her friend’s children, even though they’re being raised as vegetarians.

She says her parenting style is completely opposite to her friend’s, who’s raising her children not to eat meat, for moral reasons.

“The children are 13 and 14 and can’t even watch Harry Potter,” the mum explained on reddit. “We live next door to each other and our parenting styles are pretty much opposites but we are still friends and we look after each other’s children. They call me auntie and vice versa.”

The teens happened to pop over at dinner time one evening, and asked if they could have some of the soup the rest of the family was eating.

“The other day I was making vegetable soup for my kids. I always sweat the vegetables with bacon and end it with cream and bacon bits. The kids love it and it is easy to make. So we eat it quite often. The kids from next door came over at about the time I was serving dinner and asked if they could have some. I did think about it for a minute but decided it’s 99% vegetables so why not? They loved it.”

But when the teenagers’ mum found out, she was furious, and it caused a huge rift between the friends.

“A few days pass and I forget all about it and my neighbour asked me for the soup recipe her kids had because they won’t stop asking for it. Without thinking I give it to her and she reads that there is bacon in it and she flips out. She bans me from ever seeing her kids again and has gone to polite greetings when she sees me but nothing more.”

‘They’ve been sneaking meat behind their mum’s back anyway’

The mums have since hashed out their difference, with some home truths coming to light. As it turns out, the teenagers have been sneaking meat meals behind their mother’s back for some time.

“She messaged me out of the blue wanting to talk. Turns out the kidlets have been eating meat behind her back for a while now and confessed to her. She asked me what to do and I said if I was me I would let them eat meat outside of the house but stay vegetarian in the house. She said she hasn’t completely forgiven me for going behind her back even if I didn’t mean to upset her like I did, but she doesn’t want to stop being friends.

“As for her kids she will think about it and make her own decision on whether she will allow them to eat meat outside the house. She is just scared it will get crazy out of control but I have no advice on that.”

The non-vegetarian mum insists she doesn’t have a problem with how her friend parents her children.

“I think she is an amazing mum we are just different people with different ways of thinking and because of that we see things differently and sometimes we don’t understand each other. I am not against being vegetarian and my kids go to hers often to eat vegetarian meals.

“I just didn’t see it as a big deal at the time because that is how I am and how I parent. She saw it as a big deal and that’s perfectly OK she is justified to do so. We clashed over this and both of us didn’t understand the others way of seeing the issue and it caused a problem. I’m not trying to convert her kids to eating meat.”