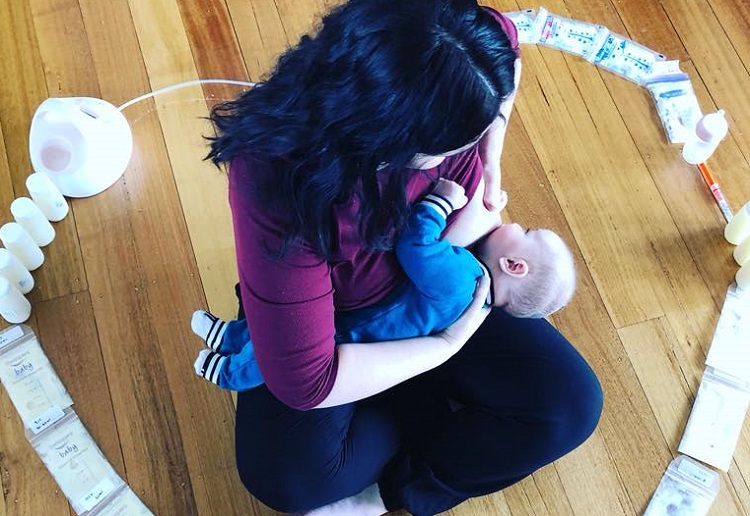 Mum of three Laura Mazza shares her battle to get support with a tongue tie diagnosis.

“That’s what was said to me after a visit to my fourth doctor, wondering why at even four months, breastfeeding made me curl my toes and grunt in pain. Why my baby would suffer from awful reflux , fuss at the breast and gulp at the bottle.

The doctor told me he would be happy to circumcise my baby, but not release his tongue tie. He didn’t see it as necessary. My baby’s tie was so thick and stringy you could play bass on it… but according to him, i was swept up in the fad. It took me five months before it was taken seriously and I saw a dentist. By then it was too late, my supply had dropped.

And I was blamed. I was guilted. And I was shattered. I was the bad mother who starved her child, when in actual fact I did everything I could.

Second child it happened again but I was ready. Third child? I saw it as soon as they held him up to me after I had given birth and didn’t bother with any advice, just went straight to a dentist.

However his tie hasn’t been an easy journey. I knew it had reattached when he started to get fussy again and gain weight slowly and my supply dropped. I’m working hard again to build it up. I’m using donor milk, I’m pumping, I’m taking milk increasing medication, I’m formula feeding. Im doing everything I can.

Pain, low supply, and a screaming baby -guilted into formula feeding and feeling guilty for doing so. Don’t! You’ve been failed. You haven’t failed.

Feeding your baby to make them grow is an amazing journey in itself.

This is the tongue tie journey; pumping endlessly, formula, feeding by syringe, donor milk, lactation consultants, empty bottles and wincing in pain… all for the person you love. To feed them. To make them thrive when no one will listen to you.

Thank you to the beautiful woman who have pumped to help Mr James, you are amazing.”

Mums have shared their own experiences on Laura’s post.

Marie wrote – “This happened to me with my first born. My health visitor was supposed to refer us for it to be cut by 6 weeks. By that point I was struggling to breastfeed him. Was in so much pain, he couldn’t latch for longer than a few minutes. I had already started expressing to ease the pain and help him not be so hungry. I randomly bumped into my health visitor at 10 week weigh in and she said “oh I forgot but I won’t do it now as you’re not exclusively breastfeeding” I was so upset and angry. He ended up on formula and I had to see my GP to get him referred. He had it cut at 15 weeks old! They said it was a muscular tongue tie so would’ve affected oral hygiene as he got older, not being able to move his tongue round his whole mouth. I felt guilty for so long for not continuing but I couldn’t do anymore than I did. You’re right that we didn’t fail, they failed us. ”

Kim wrote, “Happened to us with our last baby, very low weight gain, still hadn’t reached birth weight by 6weeks, I ended up exclusively pumping and topping up with formula as I tried to build my supply up, I knew something wasn’t right (I’d breastfeed my oldest 2) but we were told to “grin and bear it”. I made it 7 months before my supply started drying up, so ended up having to fully formula feed, I was very guttered but fed is best and I done all I could, I just wish I was helped more when I voiced my concerns.”

Angie shared, “Yes! I can totally relate to this. I finally had enough and camped out at the hospital where my pediatrician was, demanding to see him so he could fix the tongue tie. I waited for hours before he could see us. Horrible experience, and by that time I think it was too late – we still struggled with breastfeeding until my son self weaned at 9 months.”

Another said, “Same thing happened with my now almost 5 months old. We finally had it resolved privately at 4 months old after being told by many midwives and Drs that there was nothing wrong with her. She had a 90% tongue tie hence all her issues with feeding and being a small baby. Even now she’ll graze throughout the day so some days I feel like I’m feeding 247 which is fine but not how it should be had it have been picked up sooner. Well done to you. It’s so tough when you’re being told everything is fine but well done for persevering.”

Jordan Talley shared her heartbreaking experience after watching her baby girl fade away – ‘Her eyes were dull and sunken in, her skin was sagging’ – read her story here.

What is tongue-tie? via Breastfeeding assoc

Tongue-tie occurs when the thin membrane under the baby’s tongue (called the lingual frenulum) restricts the movement of the tongue. In some cases the tongue is not free or mobile enough for the baby to attach properly to the breast. Tongue-tie occurs in 4-11% of newborns and is more common in males.

Some babies with tongue-tie are able to attach to the breast and suck well. However, many have breastfeeding problems, such as nipple damage, poor milk transfer and low weight gains in the baby, and possibly blocked ducts or mastitis due to ineffective milk removal.

There are many signs that a baby is having problems with breastfeeding and they may be related to tongue-tie:

Has your child had a battle with tongue tie? Share your experience below.