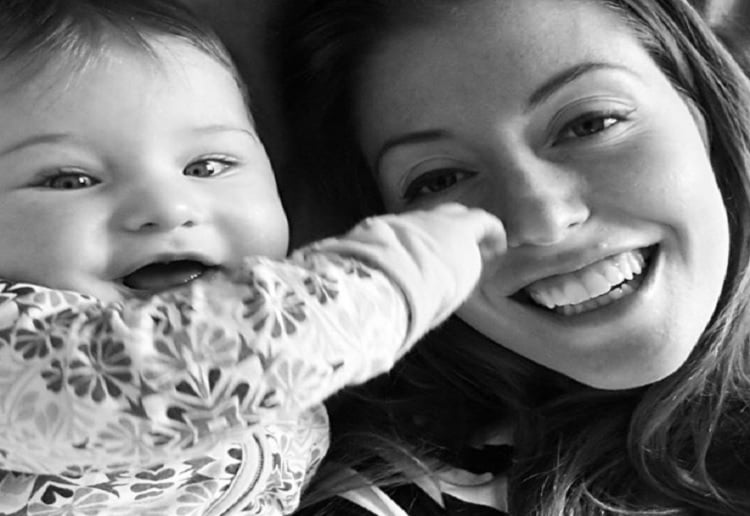 Mum who suffered permanent injuries from child birth is speaking out against a push in natural births to reduce the rate of caesarean deliveries.

Former personal trainer, Amy Dawes, suffered a stage two bladder and bowel prolapse after her daughter Eliya was delivered via the forceps method in December 2013.

The injury meant she couldn’t lift her daughter or run after her.

‘You never think at 35 years of age that your body could be broken beyond repair,’ she told Daily Mail Australia on Sunday.

‘Having to think how I get out of bed in the morning, having to manage how I move. I can’t say I feel 80 years of age but I feel older than my years.’

The Brisbane woman’s pelvic floor muscle was completely torn from her pubic bone when she gave birth in a New South Wales public hospital, aged 32.

‘I do think I’m altered as a person because of how different my life is,’ Ms Dawes said.

‘This is such a sensitive subject. It’s very hard to get women to talk about this.’

She really wanted to avoid a caesarean delivery and have a natural birth, but is now speaking out against a NSW government policy of reducing the rate of caesarean births.

‘There should be some focus about the mother’s wellbeing,’ she said.

‘It is so important to make change in this area.

‘Fifty percent of women who deliver a baby vaginally will suffer from pelvic organ prolapse at some point in their lifetime, but no one talks about it, it’s a silent epidemic.’

She is upset at not being informed of the risks of a forceps delivery, which took place after she had been in labour for 19 hours in excruciating pain.

‘I didn’t know what the long-term implications could be,’ she said.

‘There’s nothing more disempowering than choosing something that you think is best for your baby but realising you’ve altered your life completely.’

She said the forceps birth left her unable to walk for four weeks, and diminished her ability to exercise.

‘I lost my sense of self largely due to the fact that I couldn’t exercise like I used to – think weightlifting, Muay Thai and everything else in between,’ she said on her website, Mummy Manifesto.

‘Exercise had been a huge passion of mine for many years, so much so, that I qualified as a personal trainer in 2011.

‘With my new role as a mama, I had lost some of my identity.’

Amy writes on her blog, “I felt compelled to write having recently heard of another woman’s experience at the same hospital where I had my daughter.

The woman who was, like me, desperate for a ‘natural’ birth faced the same forceps or C-section decision and, having been given her options and told about the risk of prolapse and incontinence, she opted for a caesarean. I found myself wondering again whether, had I been informed of the risks, I would have chosen the latter. The answer isn’t 100% yes. I mean, it wasn’t until my girl was 16 months old that I truly discovered what pelvic organ prolapse is!

While we all did the best we could with what we knew at the time, there are still moments when I fleetingly wonder how different it may have been had my midwife been on duty that day, had I been better informed about the risks of forceps deliveries and had I not been in labour for 19 hours, awake for about 48 hours and completely out of it. What I do know is that I can’t keep looking back, or forward. All the matters is what I do with my knowledge now.”

Do you have a similar story to tell? We would love to hear from you.