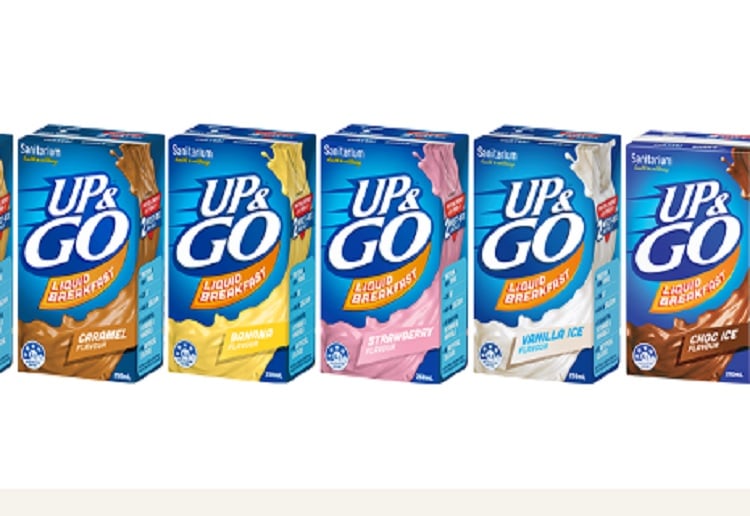 Hey, UP&GO! This is what I think of you advertising your gut-injuring junk food on my son’s favourite YouTube video.

He is FIVE and watches the exact same videos as all the other children as young as, I guess, two?

He watches YouTube while he eats, animals and unboxings and that little f#@ker Caillou, because he has Down syndrome and serious sensory issues, and food aversion, and it helps him tune out and get the job done so there’s fuel in his body.

Here he’s eating a seriously unhealthy pack of 2 minute noodles- one of the last foods I’m desperately trying to eliminate. 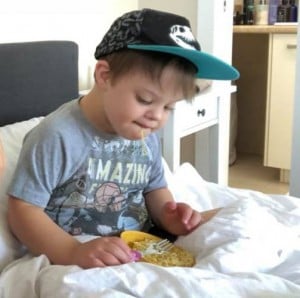 I watch him with guilt every morning at breakfast, even though I was lucky enough to see the light and switch him to green a battle which took over a year by the way, thanks for that attractive brightly coloured ad campaign you undermined me with all of last year too!

Props to your Weet Bix creative department cos you sure sucked my kids in, I was asked for Up n Go’s weekly for months, but my fault for exposing my children to television correct? Sorry I didn’t f$#k off back to my cave until your return on ad spend kicked in and you could crunch the numbers.

It’s been a long food journey for our family. Partially cos we don’t live in that cave I was telling you about earlier.

Parker used to have Up & Go’s because they’re ‘safe’, they’re pure sugar, they’re ‘easier’ than consuming actual food- kids with disabilities (and a PLETHORA of existing gut health issues) are DRAWN to Up & Go’s in droves.

Sanitarium you have no idea how many parents give their kids stuff like this (oh wait, yes you DO) and instead of increasing the nutritional content and decreasing the sugar, you increase your advertising budget and decrease your awareness of what your customers ACTUALLY want.

Healthy options. Not you faking it and rebranding junk as ‘slightly better junk’.

Can we please not shame anyone that believes that about Up & Go’s? It is so easy to be duped by and TRUST Government bodies and regulatory systems. Surely they have our best interests at heart…

My young daughter used to have Up & Go Liquid Breakfast every single day for breakfast because I believed the advertising campaign that it had the protein, energy and dietary fibre of two weetbix and milk and actually thought it was good for her.

Unfortunately the truth is shocking- this drink has a ‘4.5 star rating’ and nearly 10 teaspoons of sugar, not to mention the rest of the horrific ingredients in these drinks. This is NOT providing us or our kids with genuine nutritional value.

This petition I signed the other day is about so much more than Stars. It is about educating and empowering people to understand the deep seated corruption in the Australian food industry and HELPING parents (ESPECIALLY special needs parents) make better choices for their families- not shaming them for taking the easiest option available when they’re already stressed and at the end of their tether.

Don’t be that d@#khead to say, ‘they should just make green smoothies for their kids then.’

NO- don’t shame parents. Provide BETTER options, market to our kids, sure, but make it food that won’t potentially PREMATURELY KILL THEM.

And don’t let our government allow private corporations to grant them 4.5 stars on a ‘healthy star food rating l system’ they invented and companies can BUY the rights to slap on a label.

Can you relate to what Kat is saying?