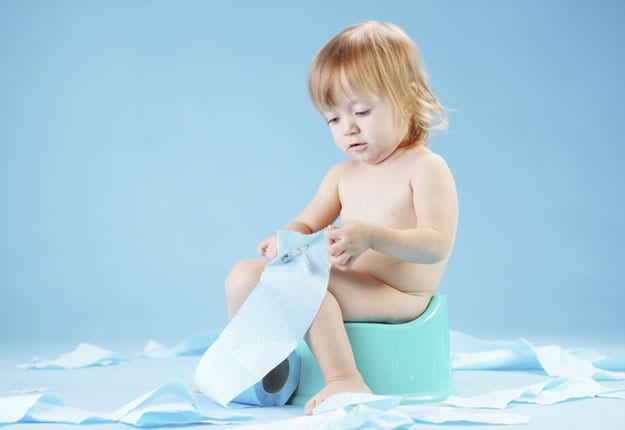 Cindy Lever says she first heard about ‘elimination communication’ when she was pregnant with her baby. She decided that it was the only option she was determined to use.

Elimination communication (EC) is the practice of not using nappies for your baby, but rather staying in tune and knowing the signs for when you need to take your baby to the bathroom to use the sink or toilet.

‘When I first told my husband I planned to do EC before our baby was born I think he thought I had really gone mad,’ Cindy tells Kidspot.

Cindy argues that using a nappy is something that baby’s learn to do when their cues for needing the toilet are ignored.

‘However, just as they can let us know when they are tired, hungry or when they have wind, if we slow down and tune in it is possible to read their toileting needs too,’ she says.

Cindy says she has a feel for her baby’s routine, and by paying attention to when she feeds, and her physical and verbal cues, she can usually avoid disaster.

‘These cues can be lots of squirming with vocal cries/grizzling which becomes more desperate the longer I take to respond to her.

‘At night she will start to wriggle and squirm quite a bit in her sleep when she needs to go to the toilet.

‘I will gently take her to the sink where she yawns and then wees. I can then put her back to bed for a feed and straight back off to sleep.’

Cindy says that even though her hubby was creeped out at first he has since gotten on board after watching her.

‘He leapt into this new parenting challenge and is also now addicted.’

Cindy says it’s similar to how you would train a puppy. Her baby is now used to the routine and it works well for them.

While it might take a little work to get the hang of, Cindy is sure it’s the way to go for her family.

‘I’d rather be doing this than changing a two or three-year-old’s pooey nappy and the closeness that you develop with your baby is even more intense and rewarding.’

Would you consider EC for your newborn?