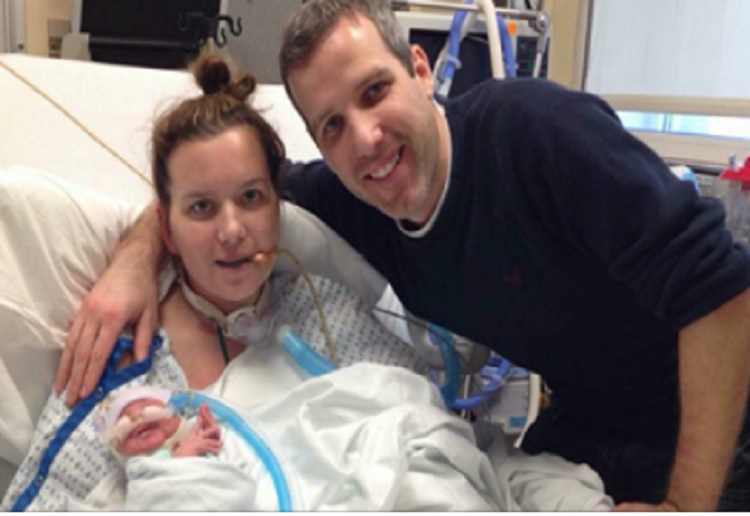 A powerful reminder of why influenza vaccine is recommended during pregnancy!

“Imagine waking up one day to find out that you’ve been asleep for 45 days straight. You’ve had four surgeries, are in a completely different hospital than the one you walked into, and your baby — who you last remember being 25 weeks pregnant with — is now a month old.”

This is what happened to now mum of three, Melissa Barvels.

Melissa shares on Babble, “On December 20, 2013, I was 25 weeks pregnant when I suddenly became gravely ill. I could barely get out of bed, was running a high fever, and was chilled to the bone — no amount of blankets could warm me. At first, I called my OB, and was told by the nurse practitioner to stay put and just “sweat it out.” But a few days later, I was still feeling like death; and had lost 6 lbs. This time, my OB told me to get to a hospital as soon as possible.”

But that’s where my memory ends.

My son Scotty, I came to learn, was born at 28 weeks, delivered via c-section on January 8, 2014. It happened a little over two weeks after I’d been intubated and placed in a medically-induced coma. He weighed only 2 lbs., 10 oz.”

“Although pregnant women are generally encouraged to get a flu shot, I never did. I didn’t think it was necessary at the time, and I certainly never knew how sick you could actually get from the flu. That might have been the toughest part about coming to terms with all of this: A simple flu shot would have changed everything. It would have saved my family and I a lot of heartache; it would have prevented me and my son from facing life-changing health effects; and it would have granted me all of the stolen memories from that time that I now can’t get back.”

The seasonal influenza vaccine, or “flu shot”, is recommended and funded for pregnant women under the National Immunisation Program. It is can be given at any time during pregnancy.

Women face a high risk of severe consequences if they contract influenza during pregnancy. The flu shot is safe for pregnant women, and provides effective protection for you and your new-born baby for the first six months of their life.

The adult dTpa (diphtheria-tetanus-acellular pertussis) vaccine is also recommended for pregnant women in their third trimester of pregnancy. This vaccine protects the mother against pertussis (commonly called whopping cough) but also the newborn as the mum passes on her antibodies via the placenta.