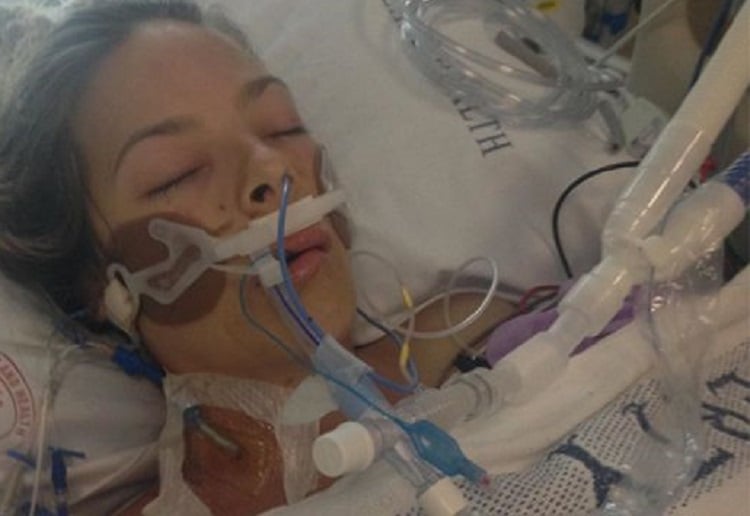 A young mother of three was shocked to learn she came extremely close to death after a botched contraceptive procedure.

Shannon Hubbard, 25, got the popular Mirena device inserted last month, when her son was eight weeks old. It nearly killed her.

The Sunshine Coast mother was required to have three surgeries and 17 bags of blood pumped into her after her GP allegedly incorrectly inserted the device.

When Ms Hubbard began bleeding just hours after her Mirena was inserted, she knew something was wrong.

“I thought something had gone wrong but had no idea to what extent. I knew I had to go to emergency because of the amount of blood I was loosing,” she told Yahoo7.

Ms Hubbard had the Mirena, also known as intrauterine device or IUD, inserted on March 22 at 11am. By midnight that same day, the device was taken out in the emergency room.

She said as the day wore on, she became more conscious of how much she was bleeding. She was filling large pads within 40 minutes and had large blood clots.

By the time Ms Hubbard got to a bed in the emergency department, she had bled through the maternity pad, her pants, and the wheelchair seat was covered in blood.

In the following 24 hours, Ms Hubbard needed three surgeries, the first one being to insert a balloon catheter in an attempt to put pressure on the bleed, which had caused blood clots about 8cm in size.

“When recovering from that surgery I had a massive bleed and was rushed to emergency surgery where a second balloon was placed in and I was taken to ICU,” she said.

She then went in for a third surgery.

“I am so glad to be here with my children and it scares me so much that I was so close to missing out on seeing them grow up,” she said.

“I feel incredibly grateful to the hospital staff who were all amazing. I feel frustrated that it could have been avoided had I known the risks and had the GP not inserted it incorrectly.”

Ms Hubbard says her GP didn’t explain the risks involved to her and now her chances at having anymore children are gone.

“I feel devastated that the option of more children has been taken away. I was advised that having more child would be very high risk and not something doctors would recommend,” she said.

“It’s upsetting because no 25-year-old woman should have that option taken away.”

Ms Hubbard says she is speaking out about her situation in the hope more women become aware of the potential dangers the Mirena possesses.

“Had I known that one of the risks was death or becoming infertile and that my chances of this were higher because I just had a baby and was breastfeeding, I would not have taken the risk,” she said.

With more than 967,000 Mirenas implanted in the past decade the Therapeutic Goods Administration has received more than 850 reports of adverse effects.
These include 70 pregnancies and more than 100 uterus perforations. Read that story here.

In 2016 researchers found a link between the use of hormonal contraception and increased risk of depression. Read more on that here.

Another study suggests birth control pills could have more dangerous side effects than previously thought. Read that here.