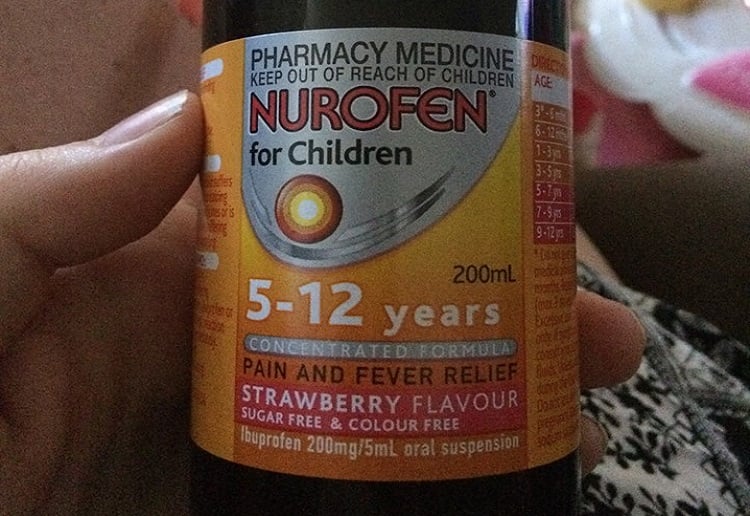 A Queensland mum’s Facebook post has gone viral attracting over 60,000 shares after she warned parents to taste test their nurofen before offering it to their little ones.

Queensland mum, Alicia Holder, issued a warning in January, telling parents to taste test their Nurofen before administering to their child.

She shared on Facebook, “Fellow parents, just a small warning about the children’s Nurofen.”

“I bought this bottle brand new yesterday afternoon and gave my daughter a dose. She instantly cried and grabbed at her throat.

Myself, Greg and my brother all had small tastes and suffered a spicy burning feeling at the backs of our throats.

Another Mum has confirmed same problem last week with a 0-2yrs bottle.

I’ve contacted the manufacturer who have asked me to return the bottle for testing!”

She adds, “Just wanted to warn others in case their kids react similarly!
Might be worth a taste test!”

But please note that the batch number on the other mum’s bottle was different!

She later added, “I am in Australia, product was purchased at Priceline Pharmacy, Kallangur, Brisbane, Qld!

I am not stating that the product is faulty as I’m not a pharmacist. I am asking parents to taste test their product and then make an informed decision as to whether or not they want to give to their child!

I promise to update everyone as soon as I receive any feedback from the manufacturer!”

Alicia updated the following month that she had finally heard back from Nurofen and they advised her “no harm should come to my child from taking the medicine.”

Alicia added, “Reading between the lines I take this as them admitting something was a miss with the bottle but it won’t kill us!

I have asked for a call back to see if any changes to the product will be made after ours and many of your experiences!
Thank you for everyone’s patience and support on this!”

The Mirror also recently shared a story from a UK mum who is warning parents to taste Nurofen themselves before giving it to their young ones, after her daughter’s bad reaction to the medicine left her concerned.

Rachel Deakin’s six-month-old daughter Autumn ‘instantly started screaming and gagging’ after tasting the children’s medicine which she was given when struggling with a cough and cold as well as teething.

And when the mum tried if for herself, she says she was horrified.

Both she and husband Shaun felt ‘a burning sensation’ in their throats and started to cough when trying the children’s Nurofen, the Manchester Evening News reports.

Other mums have shared similar concerns

“My daughter said the same thing the other day that it was “SPICY” but I didn’t realise there was anything wrong with it – this morning I went to give it to her and when she was screaming in pain pain but didn’t want her medicine I remembered what she said and tasted a small amount on my finger myself and I had the same thing A BURNING on my tongue and throat. THEN I googled and found this post. I’ve contacted the company and have reported this batch also and it will be returned for testing asap.”

Jannaya wrote, “I just tasted it and now my throat and tongue are stinging and feel numb??? I don’t know if that’s what it’s supposed to do to or not?? Maybe that’s why Tyler wouldn’t sleep I wonder if panadol does it too???”

Victoria said, “I gave Nurofen to my 14mo old last night and he instantly started screeching from pain in his throat. I tasted it and it has a distinct burning sensation, at the back of the throat. It’s the strawberry 3mth+ bottles with expiry 03/18 batch no. 607864. It’s been almost 30min and my throat feels burnt.”

Ayschia wrote, “Just checked my bottle and it’s the same batch number and I had a taste and it is extremely spicy! I feel horrible now I gave it to my son the other day when he was vomiting and wondered why he vomited so bad after and couldn’t settle.”

Nez said, “I gave my daughter nurofen from a brand new bottle a few weeks ago. And she reacted the same gagged and spat it out said it was yucky and wrong. (She’s 6, and happily takes nurofen) I ended up binning the full bottle and purchasing another from a different store and testing it before giving it to her.”

Leash shared, “We have the same and gave it to our son as pain management after he had his tonsil and adenoids out. I feel terroble he kept saying that out of the nurofen and panadol the nurofen was burning him i told him it was because the nurofen was stronger and gave it to him for a week!!! I will also be contacting the provider and sending back our bottle.”

Have you noticed an issue with Nurofen yourself?