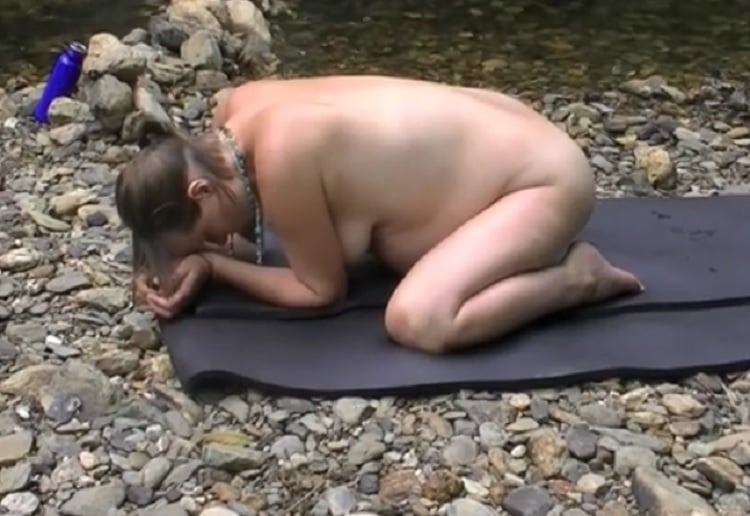 Simone Thurber, 43, who now lives in Park City, Utah, says she has been shocked by the amount of attention her 22-minute-and-32-second long home video has attracted, reports The Daily Mail.

The graphic film initially shows the brunette labouring in and out of a bathtub set up in a garden before she heads down to a creek in the Australian Daintree Rain Forrest and finally gives birth without a midwife or doctor present.

Simone, who is trained doula and birthing therapist, is then seen pushing her daughter out as her partner, Nick, steps in to help.

Simone said she uploaded the video to YouTube to show people what it would be like to give birth in nature and she never expected the amount of attention it has received.

‘After 50 people watched it I thought OMG my friends have seen me really naked, after 500 I was shocked.

‘To know that (millions of people) have taken the time to watch me having my now four-year-old daughter Perouze and to get messages from mums and dads thanking me for sharing this intimate birthing experience because it helped them feel less stressed or scared about their birth choice decisions is great.’

‘I am not a hippy drippy mum but I wanted my fourth child to be born away from beeping machines and a hospital environment.

‘Let’s face it women have been giving birth in the wild for thousands of years but the thought a modern women squatting in a creek and giving birth horrified many people even before I gave birth and shared the video.’

The video even inspired the U.S. TV series, Born in the Wild, but Simone had no involvement with the show.

Some viewers have criticized Simone for her unusual birthing location and uploading the video online.

But Simone is more than happy with her choice.