Article My Mother-In-Law Blames Me For My Child’s Disability And It Almost Broke Me! 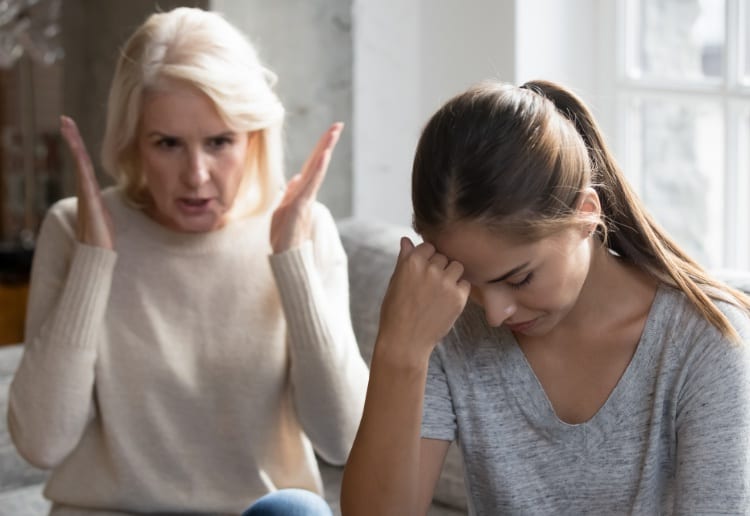 “Today I saw a little girl walking with her siblings in the shopping centre. I felt so sad. She had the WORST limp. I knew there was something wrong with her. But then I saw her mother. Her mother had an even WORSE limp. Do you see Rochelle? The mother caused the child’s disability!” The stories my mother-in-law tells are always so fascinating.

I listened to her repeating her encounter to me over and over again. She could tell that my mind was elsewhere and I wasn’t responding the way that she wanted me to.

At the moment I was just so excited, I was on the edge of my seat because for this extremely rare occasion, English was being spoken in front of me and I just felt grateful to be included in a conversation.

My Mother-In-Law Was Laying Down The Guilt!

Then the words started to sink in. The story began to make sense. And suddenly I was wishing we could just go back to the norm of everyone speaking in a foreign language around me and me just sitting there making up hilarious transcripts in my mind of what they could be saying to one another.

The next day I had a specialist appointment for my newborn. She has a problem with her hips. And although I know that the powers above will look after her, as a parent, of course, my heart was still breaking.

“Do you see how it’s always the mother’s fault? The mother caused this! She has a limp and she passed it on to her daughter. Can you see this Rochelle?” my mother-in-law asked as she attempted to gauge how much of her story I understood.

I must have seemed as though I were in a daze – probably because a huge part of me was. Either that or my poor mother-in-law feels I am just too thick to grasp the moral of her story and so she continued.

“Look at this child’s eye. She only has an eye infection because you always have eye infections. You gave it to her.” My mother-in-law patiently explained to me pointing out my daughter’s eye.

What Does She Know?

At this point, anyone reading this could very well be fooled into thinking that my husband’s mother is a medical genius. Honestly, I am surprised that scientists don’t consult her when trying to find the answers they’re looking for! But shockingly, my mother-in-law is not any sort of medical professional.

Did she think that I didn’t already blame myself for everything that is wrong with my children? Most parents are guilty of burdening themselves with this unnecessary torturous guilt as though they somehow intentionally caused harm to their little ones!

Mums Blame Themselves For EVERYTHING!

Every single time I change my ten-year-old’s diaper I blame myself. I don’t know how I caused his brain damage. But nonetheless I place the blame firmly on my shoulders and I carry it with me day in day out.

When I feel the weight of the blame starting to break me, my mind tries to console my heart that I didn’t cause my son to be the way he is. And sometimes my heart will listen long enough to muster up its strength before lifting the weight of the guilt once more.

The Guilt Is Real!

I didn’t need more weight placed on me. Not more than I was already picking up on my own. So I politely nodded at my mother-in-law and then excused myself because I was certain I could hear my Labrador distinctly calling my name.

Life happens, and it happens fast. In fact that is possibly the one thing that is guaranteed. The other thing I am almost certain of is that a majority of parents – bar some of those you hear about on the news – have good intentions for their young. We want more than anything for them to be healthy, happy and feel loved.

Yet we persecute ourselves when things aren’t perfect. Blame ourselves as though we intentionally wanted to see them face unnecessary challenges. Even though we know we would trade places with their suffering in a heartbeat.

Why Do We Guilt-Trip Ourselves?

Why do we torture ourselves like that? What’s there to gain from it? Does it ease our children’s pain for a moment? Or does it steal some of who we are away from our children?

Surely we can’t be the same people that we would be for them whilst weighed down by all the guilt we choose to carry within ourselves.

My mother-in-law’s story today was just so deeply insightful. It taught me that we as parents do pass on things to our children, whether intentionally or unintentionally. And you know what? I don’t want to teach my children to blame themselves or carry around unnecessary guilt. I don’t want to pass it on to them. So I won’t!

Be kind to yourself, the way you would want your child to be kind towards themselves.

If you’ve been tackling parenting whilst ferociously protecting the guilt you harbour, just imagine how spectacularly more brilliant it’s going to be once you put that guilt down.

Your child is watching your every move. Try not to pass on your ability to carry guilt, especially for something completely out of your control!

You’ve got this, really, you do!

What would you do if your mother-in-law said these things to you? Tell us in the comments below.