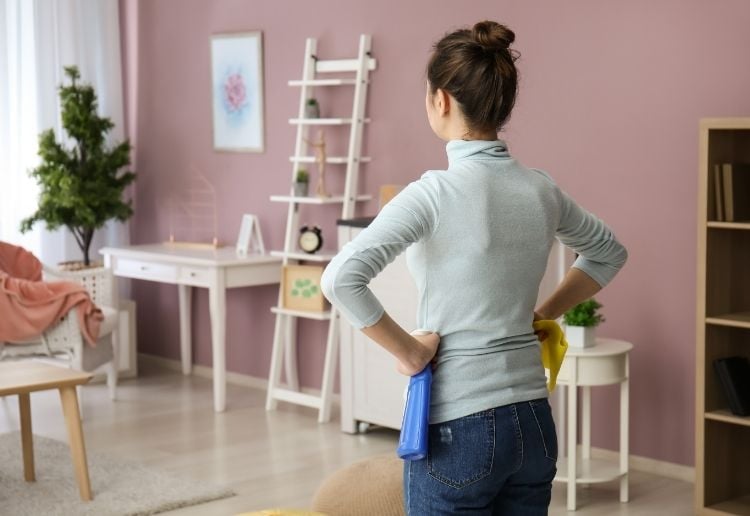 A fed-up dad says his wife makes their seven-year-old son shower immediately after visiting friends, and won’t let him have friends over because of her ‘unhealthy’ obsession with a clean house.

The 34-year-old father says he’s constantly walking on eggshells around his wife, but now fears he may have gone too far by calling her ‘crazy’.

The concerned dad says his wife Jen, 32, is a perfectionist, constantly cleaning, sterilising and organising the house.

“This has been an issue in our relationship because I constantly feel like I’m walking on eggshells around her. Her OCD tendencies have gone into overdrive ever since Robby was born.

“Don’t get me wrong, I’m happy that she’s diligent when it comes to keeping our home clean and healthy. However, I feel like it’s become unhealthy, specifically regarding Robby. Robby has cried on several occasions because he’s the only one in his friend group that can’t have company over. He’s rarely allowed to visit friends, and when he does, he has to immediately shower from head to toe thoroughly. I’ve addressed these issues with Jen, but she refuses to see me and Robby’s point of view.”

The situation came to a head recently when the family was at home, and Jen had just finished cleaning the living room carpet, and headed off to clean the bathroom. Robby poured himself a glass of milk and went into the living room to watch TV.

“At some point, Robby accidentally knocked over his glass, which spilled some milk onto the carpet,” the dad explained on reddit. “I was in my bedroom, the next thing I know, I hear Jen screaming at the top of her lungs.

“I rush into the living room and see Jen screaming at Robby while he cries in the corner. He looked terrified, he just kept frantically apologising and shaking. Jen screamed, ‘I JUST F*****G CLEANED THIS CARPET! WHY DIDN’T YOU DRINK THE MILK IN THE KITCHEN?!’ I stepped in and told Jen to calm down, it’s just a little milk, no big deal. She continued to yell nonstop and started aggressively cleaning the milk while cussing at Robby under her breath.

“I told Robby to go into his room so Jen and I could talk alone. After he left, I told Jen that she shouldn’t have screamed at Robby like that. She defended herself by saying that he knew the rules and should’ve known better. I told her that he’s a little boy who made a mistake that anyone could’ve made. After things continued to escalate, I realised that there was no getting through to her. I yelled, ‘Robby and I are sick and tired of your BS. Robby can’t even be a kid because he’s constantly terrified of you. I’m not gonna sit back and let you do this to me and Robby anymore. You’re f*****g crazy!!”

His wife fell silent, continuing to clean the carpet, while the dad took his son out for ice cream and a chat. After they returned, Jen had locked herself in the spare bedroom.

“She refuses to acknowledge me and hasn’t spoken to me since yesterday. For the first time in years, I saw her go a whole night and morning without cleaning. I’m starting to feel like I went too far, but I was just trying to defend my son.”

What do you think about the situation? Did the dad go too far, or was he justified?