Article Neighbours angry curfew note: “Keep your kids inside until 9am”

A Sydney family received a letter from a “concerned neighbour” requesting that they keep their kids inside and quiet until at least 9am.

A letter has surfaced, and has been shared to ABC Sydney Facebook Page from a fed-up Sydney neighbour requesting that a nearby family, who is currently in lockdown, keep their kids quiet in the mornings.

With most of New South Wales, Victoria and South East Queensland currently in lockdown, there are thousands of families currently juggling noisy kids, working from home, growing stress levels and a lack of freedom. Everyone, especially kids, are getting fed-up by the situation.

The letter started on a passive aggressive note, “Congratulations on your renovations. Your neighbours have endured many months of construction noise and now we are being disturbed by your kids in the backyard early in the morning.”

The letter recipients, who are residents of Mosman, are currently in lockdown and have been for weeks. No doubt they’re juggling kids, working from home and all in a confined space.

The letter also states, “We wish to request that you keep your young kids indoors until 9am.” 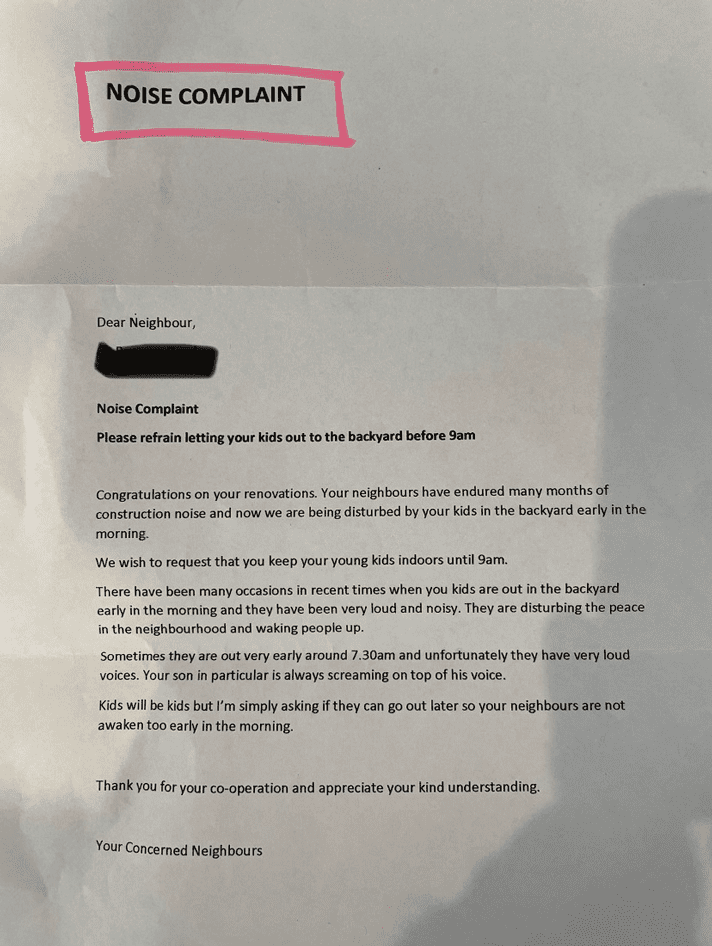 “THEY ARE DISTURBING THE PEACE”

The neighbours who typed the letter are getting frustrated at waking to the noise of kids playing, “There have been many occasions in recent times when you (sic) kids are out in the backyard early in the morning and they have been very loud and noisy. They are disturbing the peace in the neighbourhood and waking people up.”

Kids are noise-makers, there is no doubt, and the neighbours are over it. “Sometimes they are out very early around 7:30am and unfortunately they have very loud voices. Your son in particular is always screaming on top of his voice.”

The letter took a slightly softer turn to finish, “Kids will be kids but I’m simply asking if they can go out later so your neighbours are not awaken too early in the morning. Thank you for your co-operation and appreciate your kind understanding.” The “concerned neighbours” then slipped the letter into the letterbox and hoped for the best.

Do you think it’s fair that the neighbours are asking for quiet in the mornings? Or is it an unreasonable request?