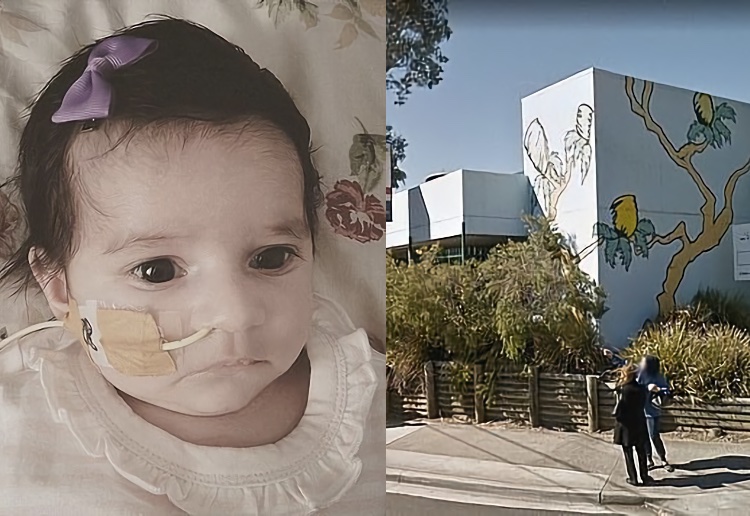 It was the most tragic story, which could easily have been prevented. Now, these parents will be living with the impact of this deadly hospital bungle for the rest of their lives.

The parents of a little girl, who was administered nitrous oxide instead of oxygen when she was born, have spoken out about the awful mix-up that has ‘ruined their lives’ forever.

A subcontractor failed to perform the necessary tests when installing medical gas in the delivery ward at Bankstown-Lidcombe Hospital in Sydney. As a result, the two gas pipelines were mixed up and the life-saving oxygen gas pipe was actually pumping out potentially fatal nitrous oxide (aka laughing gas).

The Khan family were victims of this terrible hospital bungle when their daughter, Amelia was born via C-section in June 2016 at the hospital.

The birth team made the decision to administer oxygen to the newborn to assist her breathing, of course, not realising the gas line had been mixed up and they were inadvertently poisoning the baby instead.

As a direct result of this hospital bungle, Amelia suffered critical and irreparable brain damage.

Another Baby Is A Victim Of The Mix-Up

In a related case, another newborn, John Ghanem, died at the same hospital a month later after also being administered the incorrect gas.

Parents Speak Up About Life-Altering Mistake

Amelia’s parents Benish and Danial Khan opened up about the life-changing incident on 60 Minutes on Sunday night.

“You would never for a second think that in a country like Australia, something like this can happen,” Mrs Khan told 60 Minutes.

“I am angry about this. And you know what? You really have ruined our lives.”

Disturbing footage broadcast on 60 minutes, shows the exact moment the medical team put a mask over Amelia’s face to assist her breathing.

“It is just something that haunts you forever!” said Mrs Kahn.

The installer, Christopher Turner, was charged with serious workplace health and safety breaches and was sentenced last month in the Downing Centre District Court after he admitted to lying that he tested the gas outlets when he hadn’t.

Mr Turner pleaded guilty and was fined $100,000. District Court Judge David Russell said both families had cause to consider the punishment lenient, but noted there was no scope under the Act to impose a prison sentence.

Mr. Turner’s penalty (the maximum fine under the Act is $150,000) was reduced for his cooperation with authorities and expressing remorse in a written statement.

Judge Russell said the mix-up would not have occurred if the contractor had “properly carried out tests of no great complexity”.

“In 43 years as a barrister and then a judge I cannot think of a more tragic case,” he said.

“Amelia Khan has been condemned to a terrible existence. Her parents will have to provide care and assistance to Amelia and deal with their own grief.”

However, Amelia’s doting parents remain positive despite their tragic circumstances.

“We like to teach Amelia that although these things happen, we forgive and we don’t hold grudges with anybody. We never have,” Mrs Khan said.

The parents of the newborn boy who died due to the hospital bungle, Sonya and Youssef Ghanem, have released a statement through their family lawyer Stephen Mainstone.

“No penalty handed down by a court will ever bring back their son who they lost in not only tragic but completely avoidable circumstances,” the statement said.

What are your thoughts about this awful hospital bungle? Tell us in the comments below.