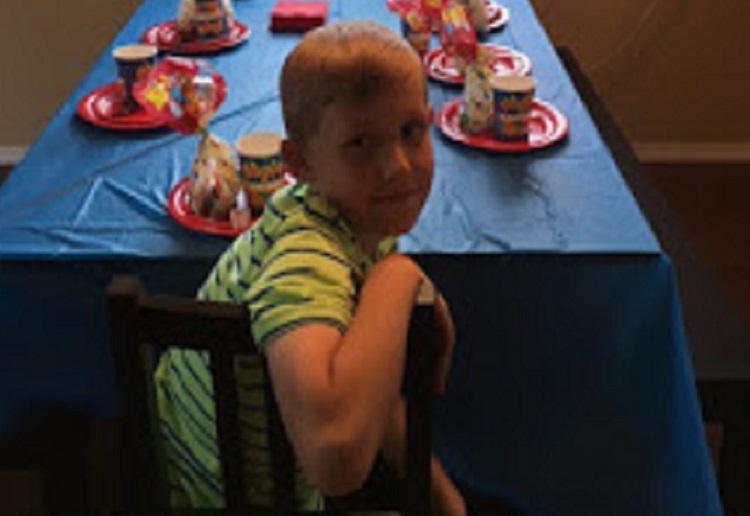 A heartbroken mother writes an emotional blog post describing her “utter devastation” after no one turned up to her son’s ninth birthday party.

The mother-of-six from America, who goes by the pen name Kristen Layne, and blogs at Life on Peanut Layne, described her son Mahlon as “The kid who would give the shirt off of his back to a stranger, and hand over a beloved toy to make another child smile”.

Despite this, not one child from school or Mahlon’s taekwondo class came to his birthday party.

“Since we’re new in town (and school just started a little over a month ago here), I didn’t have phone numbers for any of the parents.”

This was Mahlon’s first year attending a public school, after being home-schooled for much of his life.

Ms Layne considered cancelling the party but her son had assured her that five of his friends were definitely coming.

The mother-of-six went on to say, “He handed out multiple invitations to his friends at school, and one from taekwondo.

“When his birthday finally arrived yesterday, he was up before the sun.”

Ms Layne watched as her little boy ran up and down the street anxiously waiting for his party guests.

“But no one came. Not a single child,” Ms Layne added.

Mahlon told his father, “No one came Dad. I guess I’m not very popular at school”.

Ms Layne said Mahlon later started sobbing when he realised nobody was going to turn up.

“I don’t blame the kids who didn’t show up, and i’m trying very hard not to blame the parents as i’m honestly too devastated to be angry.  There are a million excuses and scenarios that could explain why no one showed. Perhaps they didn’t feel comfortable sending their kids over to our house for a couple of hours, perhaps they already had plans, perhaps their child was sick, or perhaps their child’s invitation never made it home and is crumpled up into a ball at the bottom of their backpack, who really knows? What I do know though, is that M will likely never forget his ninth birthday. It will forever be etched in his memory bank as that one year when no one came to his party. And that kills me as a parent. And it could’ve all been avoided by a simple RSVP, via phone call, text, email, whatever, etc.  I know I will definitely never ignore those four little letters ever again.”

Parents please remember – “It could’ve all been avoided by a simple RSVP, via phone call, text, email, whatever, etc.”

Has your child ever had a similar experience?

Image via Life of Peanut Layne