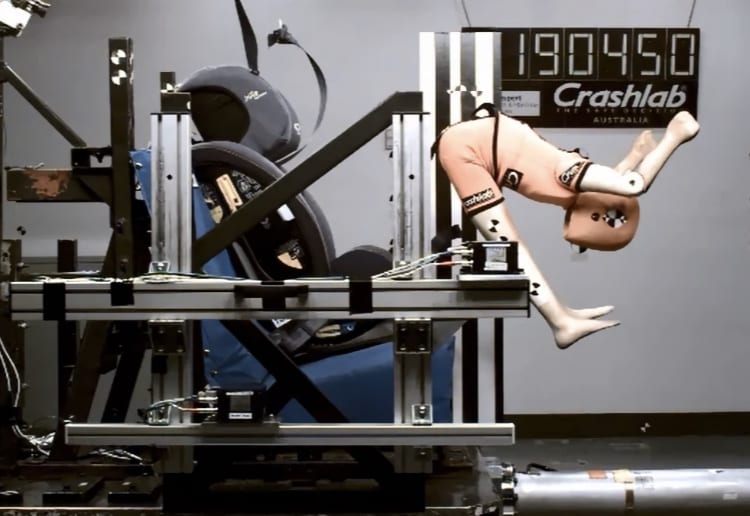 A pricey Australian children’s car seat has dramatically failed a crash test and ejected a dummy in what could be a fatal blow in a real-life car accident.

This is actually the first time a crash test dummy has been forcibly ejected in more than 25 years of crash tests performed by the independent not-for-profit Child Restraint Evaluation Program (CREP).

The concerning test showed the straps of the car seat releasing on impact in a crash at 56km/h, with the dummy flying head over heels and somersaulting in mid-air.

The car seat that failed the test is the Joie I-Travvel Car Seat, priced at $629 and had been secured in the forward facing position, using ISOFIX – which is an alternative way of securing a child restraint without using a seatbelt.

Even when secured by a seatbelt, this particular car seat scored one star in forward-facing mode, but the dummy was not flung out of the seat.  In rear-facing mode, the seat scored four stars in the CREP testing.

The CREP program tests the safety of car seats when placed under more rigorous real-life conditions, including impact at 56km/h.

Australian standards test car seats at an impact of 49km/h and under these conditions, the Joie I-Travvel Car Seat meets the basic requirements for safety.

The results were unprecedented, shocking and the outcome could be catastrophic, she said.

“This is the first time a restraint failed to the extent that the dummy was ejected. Choosing the correct child seat could be a lifesaving decision so it is critical parents make their purchase based on performance and ease of use rather than price or aesthetics.

Would My Child Survive?

“Any parent looking at the footage of a crash test wouldn’t have any comfort that a child would be restrained and survive a crash. That’s what parents demand: That a restraint should restrain a child and save his or her life,” Ms Vlahomitros said.

“These tests demonstrate once again that not all car seats are created equal and the manufacturer needs to lift its game.”

The main concern is that those parents who had bought the Joie car seat for use in rear-facing mode, when it was first launched last April, will now be considering turning the child around to forward-facing mode. 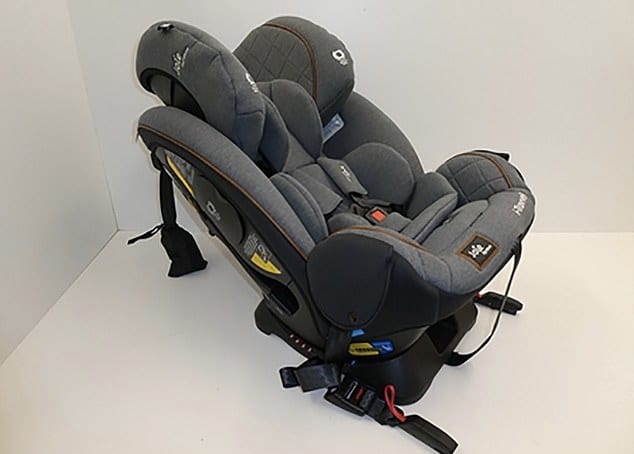 The shocking results of this test instigated CREP to introduce a zero rating. The organisation has also notified the Australian Competition and Consumer Commission (ACCC) and Standards Australia.

The manufacturer of Joie Baby products, Bright Children’s Products Co Limited, said that it “was deeply troubled by the CREP result”.

“The safety and well-being of our customers and their children is paramount to Joie Baby, and we are thoroughly reviewing the results as a matter of utmost urgency to understand the results fully and what further action may be taken,” the company said in a statement.

They did add that the children’s car seat complied with the Australian/New Zealand Standard for child restraints (AS/NZS 1754), which was widely considered to be among the most demanding in the world.

The Joie i-Gemm Infant Capsules, manufactured by the same company, was recalled late last year as its top tether strap was liable to release under excessive load, potentially injuring a child.

Find more details about the crash test ratings for car seats at www.childcarseats.com.au

Would you be concerned about the results of this car seat test? Tell us in the comments below. 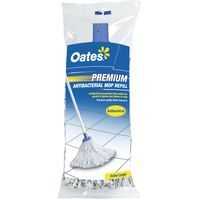