Article Rare surgery for baby born with heart outside her chest 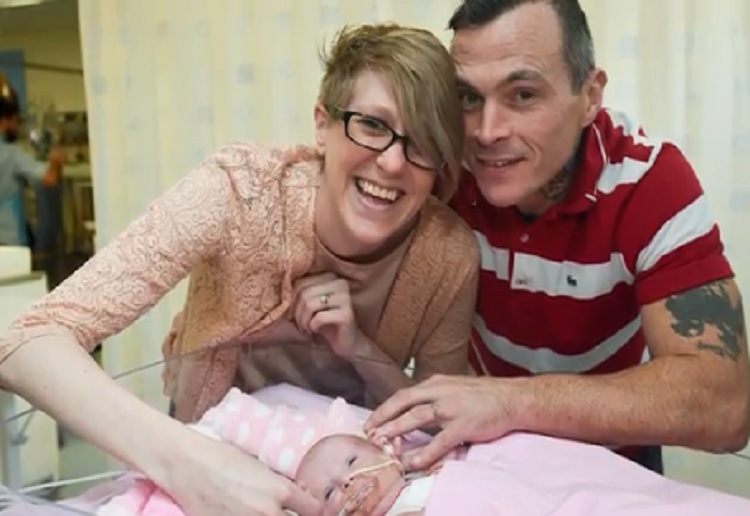 UK baby born with an extremely rare condition has fought and won three surgeries to place her heart inside her chest.

Baby, Vanellope Hope, was born in late November with her heart growing on the outside of her body, Glenfield Hospital in Leicester said.

Vanellope Hope is believed to be the first baby in the UK to survive the rare condition through operations.

Her parents, Naomi Findlay and Dean Wilkins, found out about their daughter’s condition at their nine-week scan, The Guardian reports.

They were advised “termination” was their only option moving forward.

“I burst into tears,” Ms Findlay said of being told about her daughter’s chances for survival.

“When we did the research, we just couldn’t physically look because the condition came with so many problems.

Her parents were told the first 10 minutes after her birth were the most crucial, because of breathing issues, but she came out screaming, the best possible sign.

“The relief fell out of me.”

Mr Wilkins said “20 minutes went by and she was still shouting her head off – it made us so joyful and teary”.

In the weeks following her birth doctors worked to open a space below her heart and and gravity slowly pulled it into its rightful place. She is now in the hospital’s paediatric intensive care unit attached to a ventilation machine as her organs battle for space inside her chest.

Dr. Nick Moore said “she has a long way to go but so far at least she now has a chance at a future”.

*Some readers may find the below video distressing.

You can read about my families journey HERE.

Image via The Guardian