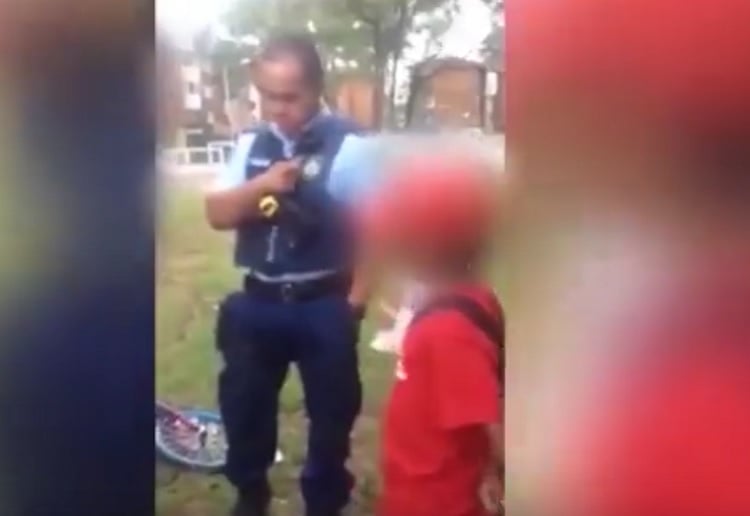 The video, filmed by the young boy’s mother, was posted online to Facebook (since removed) and shows the boy abusing officers who arrested him for allegedly throwing rocks at passing buses, near Lethbridge Park in Mount Druitt.

“You’ve been involved in throwing rocks at passing vehicles, as well as causing damage to two different bus windows,” an officer can be heard saying.

The boy swears and walks erratically, and an officer can be heard saying, “Stop swearing, settle down”.

The woman behind the camera can also be heard saying she is going to make the video go “viral”, shortly before her son calls the officer a “stupid pig” and a “dumb dog”.

“This is going on Facebook when I get home. I wish people would leave my kids alone”, she says.

As the officers leave, the boy calls them “redneck motherf—–rs”.

He has since been charged over the alleged incident with the buses and will face the children’s court in March.

The woman has since told 9NEWS her child simply defended himself.

The boy’s mother said she was concerned for the safety of her son and felt her family was targeted.

“It’s constant harassment, everywhere he goes. I’m over it, I’m sick of it. I’m way sick of it. They aren’t the greatest kids in the world, but they’re my kids, and I’ll stick up for my kids,” she said.

“I cried my f—–g eyes out. I’m sick of my son being picked on by authority.”

She also denied her son had thrown rocks and said she was proud of her son’s actions because she felt he had stood up for himself.

“He’ll stand the ground for himself. You don’t hear the good things these kids do. It’s just stereotypical Mount Druitt.”

The young boy has said – “When they put the cuffs on they put ‘em too tight and threw me against the wall.  They were doing their job but they always pick on me for nothin’.”

The woman asks – “Did they show you respect?”  *he shakes his head  – She continues “So are you going to show them respect?”  He replies – “Nah!”