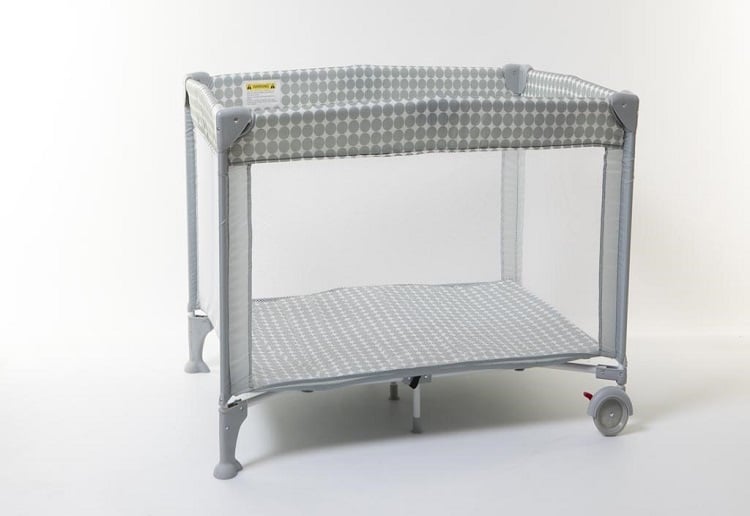 Ten out of 12 portacots failed to meet mandatory safety standards.

While BIG W has voluntarily recalled its Dymples portacot in response, the other portacots from these brands are still on the market.

CHOICE claims ten out of 12 portacots tested by CHOICE in May 2018 failed to meet mandatory Australian safety standards, posing suffocation and injury risks to babies, and all 12 failed the stricter voluntary standard.

“The 12 portacot brands in our May 2018 test all fail to meet the voluntary safety standards, so we don’t recommend any portacot products.”

What the manufacturers told CHOICE:

Big W (Dymples portacot)
“Big W customers have been returning their portacots and have received a full refund and appreciated the notification. The customer response has been positive thus far,” says Vanessa Churnin, head of communications and corporate affairs, Big W.

“Meanwhile, we have commenced investigations to determine why the product has now failed testing when the manufacturer had previously provided test reports showing that the product met all relevant Australian Voluntary and Mandatory Standards.”

Love ‘n’ Care tests the portacot overseas where the cot is manufactured, but says it will look into additional testing in Australian labs.

Teal says Baby Bunting believes the portacot complies with the mandatory Australian standard and is safe. However, the company is commissioning updated independent test reports in light of our findings.

The Joie cot failed a test relating to the gaps in the corners between bassinet and cot in our testing. The company says the cot passed when tested at an accredited lab in 2015 and that there have been no design changes since then. However, because doubt has been raised about this particular compliance issue, the company plans to re-test the cot.

Babyhood (Babyhood Bambino Dormire 2 in 1 Porta Cot)
Babyhood declined to provide a comment for this article.

Kmart (Baby Solutions Travel Porta-cot)
“The Kmart Baby Solutions Travel Porta-Cot has been tested regularly by internationally recognised and accredited laboratories and has passed the full requirements of the mandatory Australian Standard AS/NZS 2195:1999 which is for folding cots,” says Mandy Confoy, public relations manager, Kmart Corporate Affairs.
Kmart says it offers refunds on faulty products but didn’t say whether it would offer refunds for the Baby Solutions product.

CNP Brands (Childcare Trio 3 In 1 Travel Cot)
“CNP Brands has considered the review published by CHOICE regarding the Childcare Trio 3-in-1 Travel Cot in which the findings and expressed sentiment are in stark contrast to the diligent third-party testing that classified the product above and beyond the mandatory Australian Standard,” CNP Brands say in a media statement.

“CNP Brands remains absolutely confident in the safety of the product as reflected by extensive independent testing.
“While CNP Brands disagrees with CHOICE’S interpretations of testing guidelines in their final report, we will consider any opportunities for improvement to ensure we continue delivering first-class products.”

Our testing found that the Phil & Teds portacot doesn’t comply with the standard because it lacks a firm, flat and rigid base. Phil & Teds disagreed with our findings.
“The Traveller 4 is intended to be used on a firm and flat surface and it is this surface that gives the base the rigidity and firm and flat support. We therefore have a differing interpretation than CHOICE,” says Pierre Pradervand, a product compliance specialist with Phil & Teds.
Phil & Teds says the portacot mattress complies with the sleep surface test for firmness (AS/NZS8811.1-2013) and that the Traveller 4 has obtained a third-party verification of compliance to CPN4 plus certification to ASTM USA, SOR Canada and EN Europe.

Our testing found that the Steelcraft portacot poses a finger injury hazard to the person setting up the cot, but Britax’s Nursery Product Director Janelle Parkinson says this is only an issue if the instructions aren’t followed.

When used without the bassinet, the Steelcraft portacot poses no risk to the child, our testing found. However, the bassinet is supplied with the portacot and represents a limb entrapment risk.

Target (Target Holiday Portacot)
“The Target Holiday Portacot has been tested by an independent accredited third party laboratory and has passed the full requirements of the Australian Standard AS/NZS 2195:1999 which outlines regulatory requirements for portable folding cots,” a Target spokesperson says.
Target says it offers refunds on faulty products, but didn’t say whether it would offer refunds for the Holiday portacot.

Valiant Brands (Vee Bee Amado Travel & Play Cot)
“The Amado Portacot has been independently tested and certified to satisfy all the relevant standards by internationally recognised testing labs Intertek. As such we deem it inappropriate to offer unnecessary refunds,” a Valiant Brands representative says.

Kidsafe shared these tips for safe portacot use: