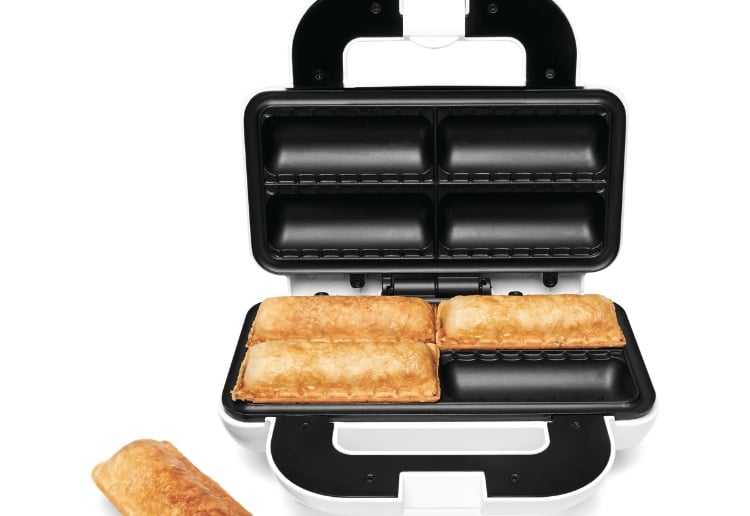 First, there was the pie maker, and then the family pie maker and now the Kmart sausage roll maker is the latest must-have appliance for the kitchen.

There is almost a cult following for the Kmart pie maker. It has spawned Facebook groups with thousands of members dedicated to creating all kinds of exciting pie-like dishes. And we’re predicting, the new Kmart sausage roll maker is going to attract similar support.

This new appliance has non-stick plates and makes four large sausage rolls at a time. It can also stand upright for easy storage.

The excited announcement on the Kmart Pie Maker Recipe Group on Facebook has attracted well over a thousand exuberant comments.

“I can’t wait to see what we can create with this!” said one fan.

“This is a game-changer,” said another.

Many said that the pies reminded them of McDonalds apple pies and I must admit, they are absolutely right. Although this version would be healthier as the Maccas ones are deep-fried. I forsee lots of creative dessert recipes ahead. I’m thinking banana crumble pies, vanilla ‘slice’ pastry rolls, apple and cinnamon and Nutella cookie crumble pie. But of course, this nifty appliance would make a mean traditional flaky pastry sausage roll too. Oooooh can’t wait to try it out!

There Have Been Others…

Pie In The Sky

The Kmart sausage roll maker is priced at $29 but sadly sold out in minutes online. The shelves in store are also bare.

But don’t despair. I assure you, the exact same thing happened when the pie maker was launched. I struggled for months to get my hands on the popular pie making machine but now they are pretty much always available online and in store.

How To Get Your Hands On The Kmart Sausage Roll Maker

So my strategy is just to watch and wait. Join any sausage roll maker / pie maker facebook groups, start making note of the recipes you want to try and let others mess up and fail so you can learn from their mistakes. Keep an eye out on announcements in the groups about new stock appearances and check online regularly. Be stealthy and then strike quickly! You’ll soon have the new Kmart sausage roll maker and be the envy of all your friends.

And while you’re waiting, you can whip up some yummy sausage rolls, the traditional way.

What would you make in your brand new Kmart sausage roll maker? Tell us in the comments below.