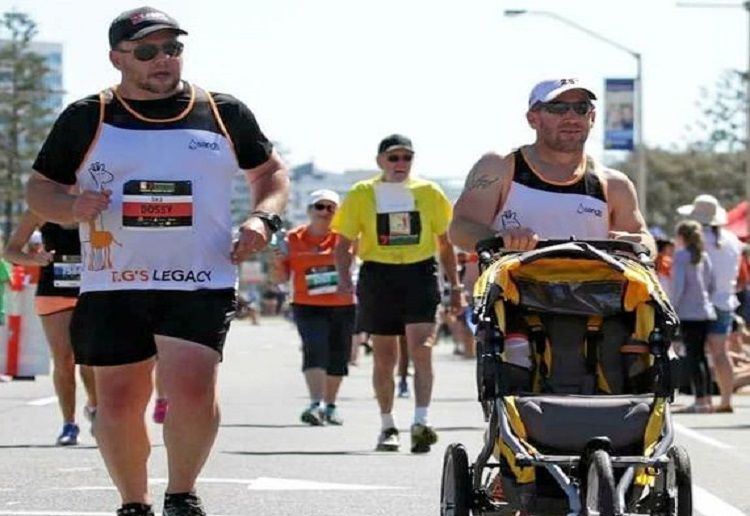 You would think running in a charity marathon people would be sympathetic to your private story, but this dad found that was not necessarily the case!

“HEY mate you have lost your kid”, those few words made Troy Austin feel like the ground had fallen from beneath him.

Mr Austin HAS lost a kid, but not on the day of the marathon. His baby son T.G was stillborn.

He chose to run the Sunshine Coast Marathon with an empty pram to raise awareness of stillbirth – despite the heartache that came with it.

The 7 Sunshine Coast Marathon has helped raise more than $1,000,000 for charity and community groups since the event started in 2012.

Money raised from this not-for-profit event has been distributed to more than 70 charities including the event’s two major beneficiaries Ronald McDonald House Charities and Westpac Foundation.

After T.G’s birth, Mr Austin and wife Kelly set up a legacy for T.G with the aim to raise awareness – the very reason he chose to run with the empty pram.

Supported by two of his best mates, Brett Doss and Robert Hopkinson, the trio lined up with other pram pushers and their children, some running for a cause just like the them.

This is when Mr Austin heard the phrase for the first time and with a quick reply of “yes, that’s the point” the smile dropped from the woman’s face.

She apologised instantly, knowing her words sent an ache straight to his heart.

As the run continued, the MC even joked about the absent child.

“I heard on the loud speaker ‘here comes old mate and it looks like he lost his kid’ (with) more giggles from the crowd,” Mr Austin said.

It was at that moment Mr Austin was glad to have his friends by his side.

He said every time he heard “hey mate you lost your kid” they were there to lift him back up.

“It took a good mate beside me to have a chat so my bottom lip didn’t tremble,” Mr Austin said.

“I would try think up quick ways of saying ‘yes I have lost my kid and I am not getting him back’.

“Sometimes I could explain why the pram was empty, other times we smiled and moved on.”

Mr Austin found himself saying “no you can’t sit in and get a ride, no I am not picking my kid up on the last lap – I wish I could”.

He told the NewsMail, T.G would have been one and a half years old and sitting in the pram.

This is why he will run again, to help raise awareness about stillbirth and help to break the silence and stigma surrounding it.

“I think the empty pram is here to stay, not empty – my son was with us,” Mr Austin said.

T.G will always be on our minds and in our hearts and we strive daily to create a legacy he would be proud of.”

Please stop and think before making an offhanded remark to people. That comment can quite often be very painful to some, especially grieving families.