Article The touching way the Japanese grieve after a miscarriage 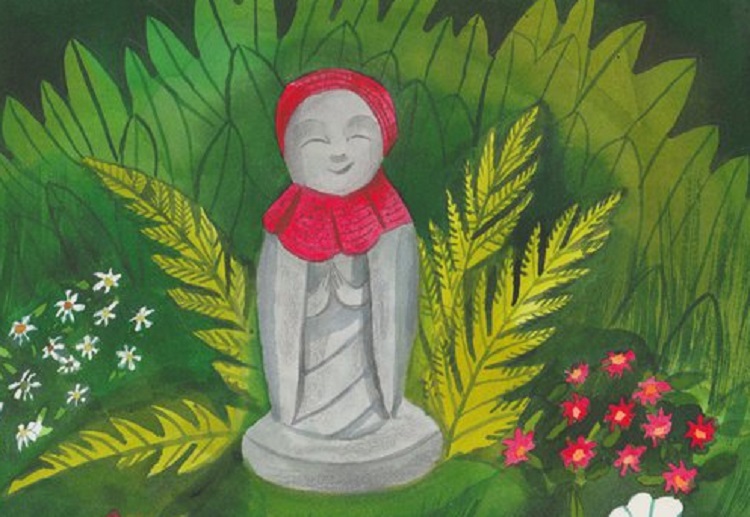 After experiencing her own miscarriage, Angela Elson, was desperate for a way to help her through the grief. Then she remembered this special Japanese tradition.

Angela shares her experience in a post on the New York Times.

She explains, “after a visit to a forest on Mount Koya in Japan she saw hundreds of stone Jizo statues lined the wooded paths.

These small figurines dressed in red caps and bibs honor the souls of babies who are never born.

This was a belief we carried for years until the day we held hands on an ultrasound table watching the technician turn off the monitor and tiptoe out of the room. A miscarriage at 10 weeks produces no body, so there would be no funeral. “What do we even do?” I asked the doctor.

She wrote me a prescription for Percocet: “Go home and sleep.”

We went home. I didn’t sleep. I was itchy with sadness. I picked at my cuticles and tore out my hair. I had all this sorrow and no one to give it to, and Brady couldn’t take it off me because his hands were already full of his own mourning. We knew miscarriage was common. But why wasn’t there anything people did when it happened?

“If only there were some kind of tradition…” I said to Brady.

“Like a Jizo?” he replied, recalling that quiet day we’d spent walking hand-in-hand through a Japanese forest of other people’s grief.

It was as if someone had poured calamine lotion all over me. “Exactly like a Jizo.”

What can’t one buy on the internet? Our statue of Jizo arrived a few days later. He was the height of a paperback and made of cement. His eyes were squinted in a mellow smile, hands folded in prayer.

According to Buddhist belief, a baby who is never born can’t go to heaven, having never had the opportunity to accumulate good karma. But Jizo, a sort of patron saint of fetal demise, can smuggle these half-baked souls to paradise in his pockets.

Brady and I grieved the baby in ways that were different but equally sad. One thing we both understood perfectly, though, was Jizo — why we had to search for the right kind of red yarn, how I had to crochet the smallest hat and coat three times to get it right. It was nice for us to have something to do, a project to finish in lieu of the baby I failed to complete. When Jizo was dressed, Brady complimented my handiwork. “Where should we put him? In the yard?”

“Maybe in a few days,” I balked, stationing the statue on our dining room table where I could pat him on the head on my way to the kitchen. I talked to him. Sometimes I kissed him when no one was looking, or I took him with me to the living room to watch TV.

It was crazy to fuss over a statue like I did. But I felt crazy, which could have been from the pregnancy hormones still coursing rudely through my body. Or maybe it was the lack of traditions surrounding miscarriage in the States that gave me nothing to take the edge off my grief. Without a prescribed course for mourning, I didn’t know what else to do besides mother this lump of concrete as if he could actually transfer my love to the afterlife.

After a few days of keeping Jizo in the house, I got to the point where I could put him on the front porch without too much separation anxiety. A few weeks later, Brady planted a garden for him in the backyard, where Jizo now sits and reminds us of the baby we lost — not so often as to make us sad, but often enough so that we don’t forget him entirely.

I’m not sure if this is the correct way to weather a miscarriage, or even the right way to Jizo.

I do know that like those parents haunting Mount Koya, Brady and I will always think of that baby who never was. We’ll leave pieces of our love for him wherever we go, hoping Jizo will deliver them to wherever he is.”