Article There is actually a reason WHY kids knock over drinks 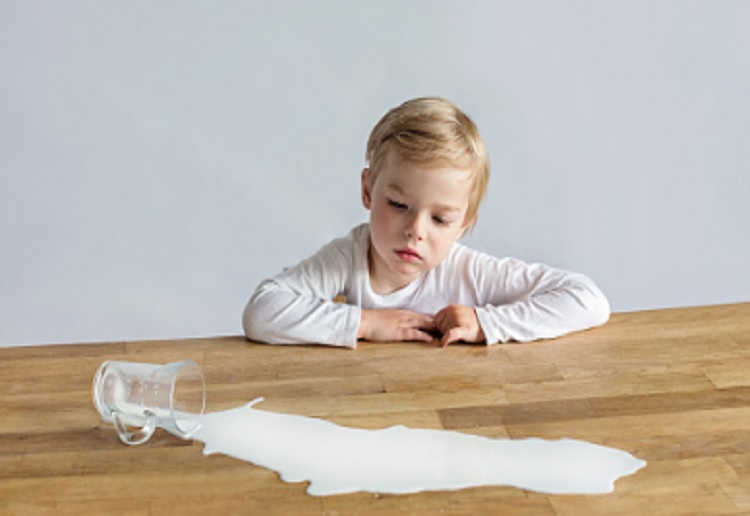 Why kids knock over drinks and must be careful around cars

It is a rare achievement to make it through dinner at our house without someone crying over spilt milk (or water, or any other liquid the kids are drinking). As I mop up the evening mess, I suspect similar scenes are played out at dinner tables around the country.

It doesn’t seem to matter how many times you ask children to pay attention or to be careful. Time and time again, an arm shoots out, milk goes flying and a child protests, “it wasn’t my fault!”

Next time you feel your parental frustration rising, it might be worth considering what science has to say about this. It turns out children may be less responsible for these accidents than you might assume.

Firstly, children do not develop adult levels of visual acuity until around 3-5 years of age. In other words, if young children were able to read they would require much larger text than adults to distinguish the letters.

In addition to fine visual details appearing more blurry, there is considerable evidence that the processing capacity of children is also greatly diminished compared to adults. The concept of “capacity” refers to the number of visual objects or features that a person is typically aware of at any time.

People are often surprised to learn that the vast majority of information in our visual environment normally goes unnoticed. This is particularly the case in cluttered or dynamic environments where a range of influences such as “crowding effects” impact the amount of information we can process at a time.

The figure above is taken from a fantastic review on the topic that describes crowding as a processing “bottleneck” that limits the number of items that can be consciously perceived by an individual at any time.

Similarly in (b) if you keep your eyes fixated on the crosses, identification of the middle shape, letter, or line orientation – or even the number of tilted lines – is difficult or impossible on the bottom half of the panel.

Compared to adults, children are both slower to process the identity of new objects and also experience increased “crowding” in their peripheral vision.
Studies looking specifically at the development of visual function in children from 3-15 show greatly increased crowding in children up to the age of 6 or 7. In young children (even up to the ages of 7-10 years) the objects in their visual environment simply never make it into visual awareness.

At the dinner table this reduction in visual capacity can lead to spilt milk and tears. Unfortunately, when kids are playing near the road the consequences can be much more catastrophic.

In both children and adults it is worth noting that the more attention is focused on one thing (such as a conversation, or a ball bouncing away from you) the more likely that other objects or events in your environment will go unnoticed.

In the same way that talking on the phone or text messaging can greatly impair our ability to detect unexpected events, a child chasing after a ball may simply have insufficient processing capacity to detect and notice a car driving down the road.

While my children have managed to avoid collisions with cars, such single minded determination to catch a ball did recently cause my 5-year-old Max to run blindly into his classmate. The full-speed collision left Max without a tooth, his friend with a bloody forehead and a PE teacher very impressed by the boys’ commitment to the ball!