Article This dangerous act is risking our teens lives 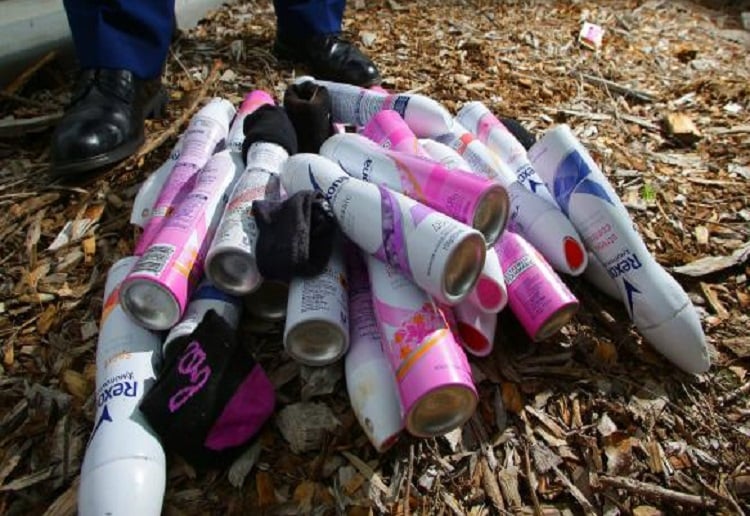 A concerned Kellyville resident called Hills police after finding a pile of aerosol cans dumped at the side of the road.

Daiy Telegraph reports teenagers are risking death in a bid to get a high from aerosol cans in a dangerous practice called “huffing”.

Inhaling volatile substances because of their intoxicating effect is called huffing, sniffing, or bagging.

Hills police are urging parents to keep a check on children for signs of substance abuse and contact their GP if they are worried.

Hills Local Area Commander Supt Rob Critchlow said: “The practice of ‘huffing’ or inhaling volatile chemicals is so dangerous it is mind-boggling anyone would do it.”

Residents in the area have reported finding discarded and empty Rexona cans for about three months but called police after a handful turned into a pile of cans along with numerous socks.

Dr Bronwyn Milne, from the Department of Adolescent Medicine at The Children’s Hospital Westmead, said inhalant use “was a concern”.

“They are depressants but young people use them to get an immediate high, but it is only for a few seconds.”

She said the unit was seeing young people who had suffered seizures and blackouts, chest pains and irregular heartbeat.

Abusers can get addicted and it can cause long-term brain damage.

She said signs friends, family and teachers should look out for were loss of motivation, teens who were more irritable and angry, memory trouble, changes of mood, anxiety and depression. There is help around. Seeing your GP is a good first step, talk to the school counsellor or parents.”

She said information was available from the Australia Drug Foundation adf.org.au or Helpline 1300 858 584

Supt Rob Critchlow said: “We need parents to be vigilant for warning signs in their children such as changes in behaviour, large numbers of spray cans or other items in the bin or dumped nearby.

“Primarily, we are concerned about the health of the young abusers, but also they can become involved in crime by shoplifting the items or behave in a dangerous manner while intoxicated.”

He asked anyone with information concerning “huffing”to call the Hills Youth Liaison Officer on 9680 5399.

A spokeswoman for Unilever, which manufactures Rexona, said: “We take the misuse of aerosols very seriously and continue to engage with local authorities and community organisations working to address the issue.

“All of our products are clearly labelled with guidelines detailing how to use aerosols safely.”
THE WARNING SIGNS

■ Other immediate effects, can be slurred speech, uncoordinated movements, aggression, hallucinations and unconsciousness