Article This is exactly why nobody should use the “R” word 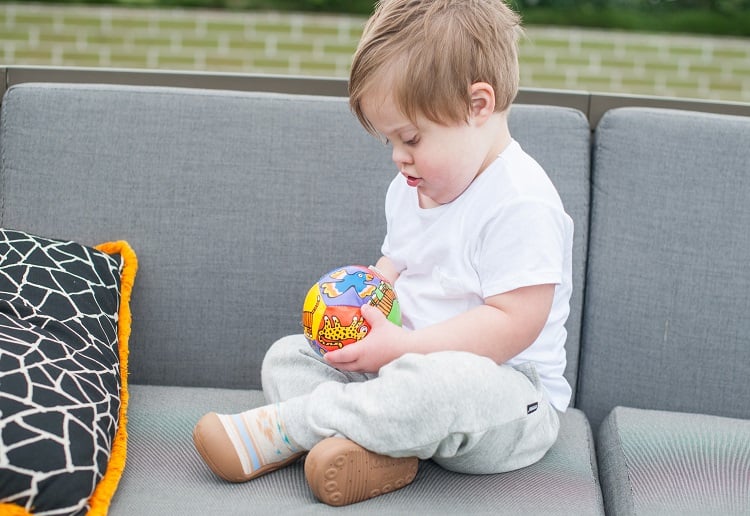 Attipas Australia are excited to announce their first Australian brand ambassador and face of their Spring/Summer campaign, Parker Myles!

Parker, 3, who has Down Syndrome and recently modelled for Bonds Australia amidst a storm of media attention due to online trolls, was selected amongst thousands of toddlers to front the brand due to his love for Attipas shoes.

Caroline Africh, CEO & Founder of Attipas says, “We offered Parker the role of being Attipas’ first Australian brand ambassador after hearing about how much he loved wearing Attipas shoes. The shoes are perfect for Parker. After seeing his cute little face online we knew he would be perfect for our Spring/Summer campaign, launching this July, so asked him to be the star.”

Parker’s mum Kat Abianac, a blogger, was approached by the brand after posting photos of Parker wearing Attipas online, and immediately said yes to the role. Kat said, “When Attipas told me they wanted Parker to front their Spring/Summer collection of toddler shoes, I was over the moon. He unboxed his new collection of Attipas shoes, lined them up in a row, gave them all kisses and tried them on!”

Attipas Australia will also be donating a percentage of profits from their Spring/Summer collection to Down Syndrome Australia. www.attipas.com.au

Just as deserving as the next person

In a recent post we shared that the Kmart Easter catalogue included young models with disabilities. While there have been many other inclusions from other retailers as well.

Parker’s mum Kat recently wrote for Huffington Post explaining why Bernard Tomic should not use the “R” word after a recent outburst in a press conference.

Kat wrote, During a Wimbledon post-match press conference overnight, Bernard Tomic was asked, “Tennis etiquette requires that both players arrive on court at the same time. You were kept waiting about eight minutes. Any idea why?”

His response: “Yeah, well, I think because he [Fernando Verdasco] was up in the locker getting something taped on as when I left and I thought he was leaving, so I just happened to walk out. Yeah, I did get to the court prior to him very early, and unfortunately I had to stand on court like a retard.”

Kat goes on to explain, ‘Retard’ is not ‘just a word’. It’s a medical term no longer in usage within this context, commandeered as an insult and as socially unacceptable as the ‘n’ word.

“What’s wrong with ‘retard’? I can only tell you what it means to me and people like me when we hear it. It means that the rest of you are excluding us from your group. We are something that is not like you and something that none of you would ever want to be. We are something outside the “in” group. We are someone that is not your kind. I want you to know that it hurts to be left out here, alone.” -– Joseph Franklin Stephens, Special Olympics Virginia athlete and Global Messenger (via r-word.org)

Kat continues, Bernard Tomic, you are 23 years old. An adult. You don’t have youth to blame or hide behind. There’s no ‘boys will be boys’. That was never a real excuse in the first place.

It’s time to grow up and step into the position in the world you created for yourself after winning the genetic lottery.”

Kat has been in the media recently since a second tennis star let the “R” word rip.

Nick Kyrgios called his entourage “retarded” during a recent match.

The Australian tennis star let fly at his courtside box, including his father and agent, for not offering enough vocal support during his third-round win over Feliciano Lopez.

“It’s all in the heat of battle,” Kyrgios explained, as part of his apology during a later press conference.

“I know some people can obviously get offended by that. I’m not meaning to be rude or disrespectful at all.”

“They’re going to keep doing it unless people stand up and say it’s not ok,” Kat said, as part of the viral post when referring to the usage of the word.

“When you use that word, that’s the worst you can think of to refer to somebody as an insult,” Kat told 7 News, fighting back tears.

Kat is encouraging everyone to take the ‘R’-word pledge with 645,000 others. Spread the word to end the word.