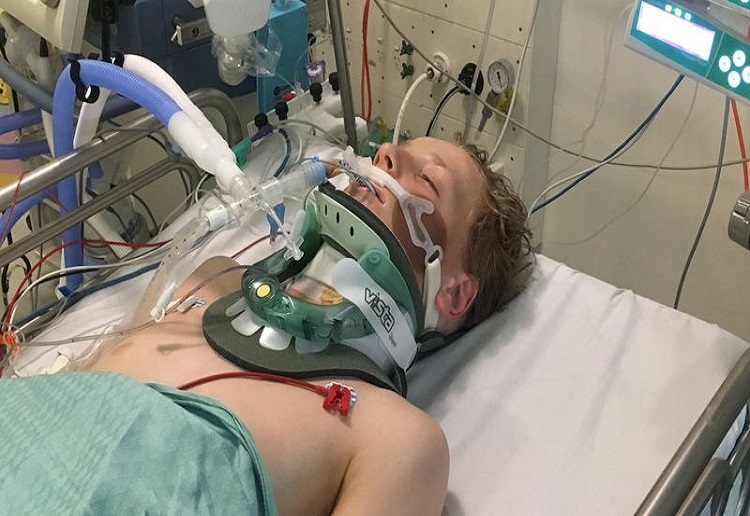 A 12-year-old boy has been left a quadriplegic after a backyard trampoline accident – and now his father has warned kids to be careful.

Peter Mould’s son, a talented athlete, and his friend were doing exactly the same thing as millions of other children in Australia when a double front flip went horribly wrong, shares 9 news.

Louie landed awkwardly on the trampoline, compressing his C3, C4, and C5 vertebrae near the base of the neck.

Louie is classed as an incomplete quadriplegic because his spinal cord was damaged and not severed. As with most higher spinal injuries, he struggled to breathe by himself and spent the first two months in ICU with tubes up his nose and via a hole in his throat.

Mr Mould said while you can’t wrap children up in cotton wool, Louie’s devastating injuries should serve as a warning to others of what could happen.

“It’s all part of this little fad kids seem to be going through,” Mr Mould said.

Emergency departments across Victoria, Queensland and Western Australia saw almost 500 injures from trampolines between 2012 and 2016. And that’s an underestimate; as the research used data from the state’s injury surveillance databases, missing those treated in private hospitals or by their GP.

Last month we shared how five year old, Riley Hoy, spent two months in a frame which was bolted to his skull after the he landed on his neck in his garden after a trampoline accident.

He bravely faced his long recovery with the help of a teddy with a matching metal brace.

But doctors had initially failed to notice he had broken his neck for five weeks, and he even went swimming and camping before a scan revealed the fracture, shares Yahoo 7.

Five weeks after the accident, Dad Steve took him to Bristol Children’s Hospital on the advice of a physiotherapist the worried family had consulted.

A CT scan revealed he had broken the crucial bone in his neck in half and the next morning he was fitted with a halo neck brace.

He was fitted with a “halo” neck brace for eight weeks, and a neighbour gave him a teddy with a matching structure – made from straws and tape – to help him through.

“One of the doctors said how he didn’t end up paralysed or worse in the five weeks, was beyond him.

“Someone was looking out for him, that’s for sure.”

Did you know kids under six should NOT be on trampolines? Read more on that here.

Trampolines have sprung up to be the leading cause of injuries for children.

Kidsafe recommends
•The area around and underneath the trampoline should be clear from obstacles such as concrete, bikes, tools, rocks, overhanging trees, electrical wires, walls or other structures.
•Never use the trampoline on concrete or pavers because the user could be severely injured from landing heavily on a hard surface.
•Surround the trampoline with impact absorbing material such as bark or mulch tested to AS/NZS4422 Playground Surfacing.
•Only one user on the trampoline at a time.
•Supervise children using the trampoline at all times.
•AS 4989 states that trampolines are not recommended for children under six years of age.
•Show your child the correct use of the trampoline by teaching safe usage practices.

Last year a Perth family were shocked after their eight-year-old was discharged from hospital with a broken neck. Read more on that HERE.

Read more stories on the dangers of trampolines: