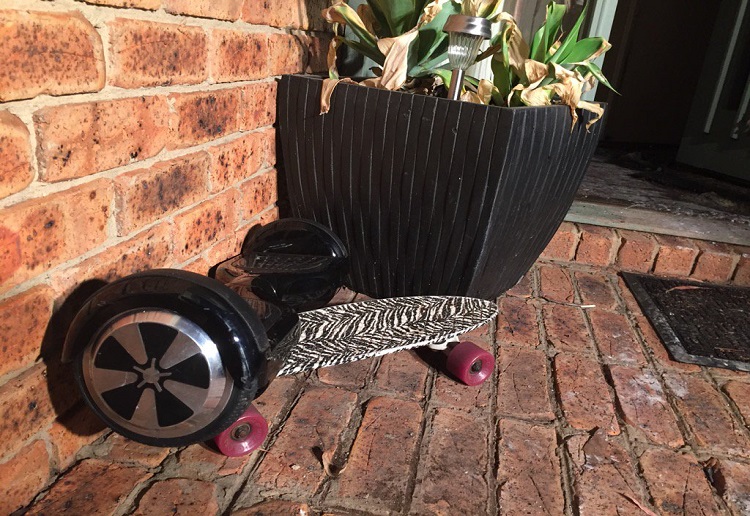 After a family in Melbourne lost their home on Monday night when a hoverboard caught fire while on charge in a bedroom.

“I’ve … written to Kelly O’Dwyer, the Federal Minister responsible, and said the Federal Government needs to consider a permanent ban on these toys, given there are many products out there that don’t meet the standards and can be deadly,” she said.

Ms Garrett urged anyone owning a hoverboard to double check that it was safe.

“Please check Energy Safe Victoria to see if it’s been a model that’s been recalled and if it is, you have to get it out of your house now,” she said.

“We’ve got a blitz on with Consumer Affairs inspectors right across Victoria going to retailers and checking toys on the shelves.

“Any toys that don’t meet those strict standards will be removed and fines can be imposed.”

ACCC deputy commissioner Delia Rickard said she believed the incident in Melbourne was the first fire caused by a hoverboard in Australia, and it should not have happened.

“We know that some people, they are going to insist upon using them, they are not going to listen to the safety warnings they’ll say, “Oh it won’t happen to me’.

“So at a minimum, we are saying if you are insisting upon using them, keep an eye on them.

“Do not leave them unattended for long periods because it could result in fires.”

The ACCC has identified two safety concerns with hoverboards: fires that have occurred from the faulty design of some hoverboard chargers and user injuries through falls.

Hoverboards have an in-built battery that is charged by connection to a mains power source. Electrical safety experts advise that fires, as reported, most likely relate to products that would not comply with Australian electrical requirements, or to the use of a charger meant for another device.

·        Ensure that the packaging is marked with the Australian regulatory compliance symbol or RCM – a tick surrounded by a triangle. The RCM signifies that a supplier has taken the necessary steps to ensure the product complies with electrical safety requirements

·        Always use the approved battery charger that came with the product. If there are signs of damage near the battery do not charge the unit until the device is inspected by a professional

·        Hoverboard owners are advised to follow the manufacturer’s instructions exactly when using and charging their hoverboard. Adults should supervise the charging of all electrical devices for children.

·        Consumers should check the recalls website to see if their product or charger has been recalled.

·        Users should ensure they use appropriate safety equipment, including a helmet, knee pads, elbow pads and wrist guards. Always wear shoes when riding a hoverboard

·        Riders are strongly advised to checkwith their local traffic authorities or police before riding a hoverboard in a public place.