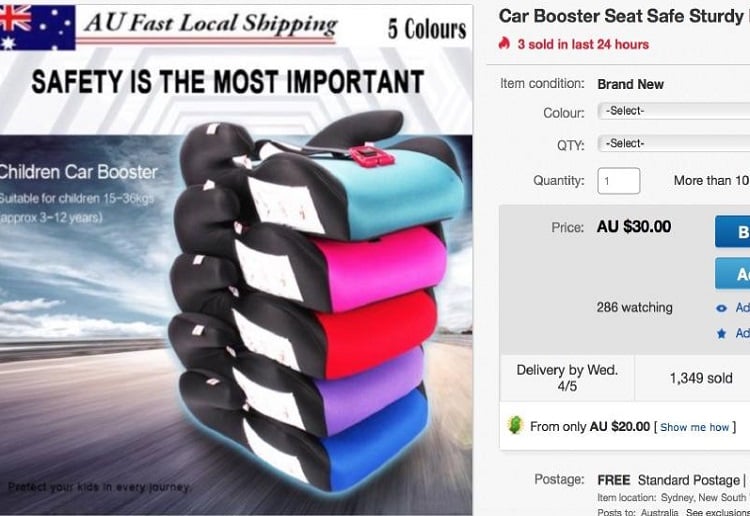 Families are grabbing up online bargains with the mistaken belief that they meet Australian safety standards. They do NOT!

News.com.au reports, the cushions are being advertised on websites such as eBay, with claims they meet European standards — not Australia’s strict standards.

New Australian rules introduced from 2010 have tougher requirements for side impact protection and positioning of the seat belt.

Industry experts say the booster seat cushions offered for sale on eBay — ranging from $15 to $58 — are being imported from China and sold by independent distributors in Australia.

Local sellers of non-compliant booster seat cushions are risking fines of up to $220,000 for individuals and $1.1 million for companies, says the consumer watchdog ACCC.

In some states, the police fine to drivers for putting their kids in non-compliant or incorrectly fitted child restraints is up to $325 and three demerit points.

But experts say fines are rarely issued because illegal products are hard to identify at a glance.

Booster seats are still legal in Australia, however….

It is strongly advised against using a booster cushion (with no back or side protection). They won’t provide additional cushioning in the case of a crash and have been deleted from the most recent 2010 and 2013 standards, so it’s rare to find them on sale.

However, it’s not illegal to use one that met Australian standards at the time it was manufactured.

Older booster seat cushions with an Australian Standards approval label are still allowed to be used as long as they are within 10 years of the date of manufacture, which is printed on the restraint.

The handful of local companies that previously manufactured and sold booster seat cushions that met Australian standards have not made them for five years or so, since the strict new regulations came into force.

The Australian Competition and Consumer Commission (ACCC) told News Corp Australia it “regularly surveys and tests the Australian market and seeks the removal of non-compliant child restraints including booster seats”.

“Any booster seats that do not meet the requirements of the mandatory standard may pose a serious safety hazard and will not adequately protect a child passenger in the event of a motor vehicle accident,” said ACCC spokesman Duncan Harrod.

The ACCC says it is currently assessing the child booster seat cushions being advertised for sale on eBay.

“The ACCC welcomes information about the possible supply of any unsafe product, including any concerns with child restraints, at www.productsafety.gov.au  ‘Report an unsafe product’.”

Before buying a child car restraint it is important to check that there’s a tag on the seat showing certification to the Australian standard.