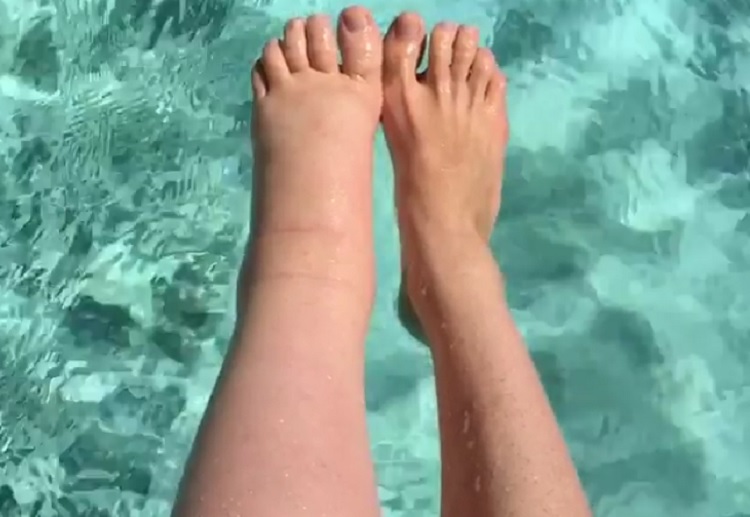 A mum has been left with a chronic condition after her pregnancy.

Sarah Buller was stunned when her left leg swelled to an enormous size at the end of her first trimester.

After she had given birth the 31-year-old went to the doctors where she was diagnosed with lymphoedema - an incurable condition that causes swelling in the body’s tissues.

Sarah’s pregnancy had triggered a chronic problem with her lymphatic system, meaning the lymph fluid is unable to circulate around her leg properly now – leaving it weighing two stone (12.5kg).

The mum-of-two, currently living in Nice, France, now spends hours every day bandaging her leg, using compression socks, exercising and having massages in a bid to relieve the excess fluid, reports The Mirror.

In May, Sarah spent her savings on Vascularised Lymph Node Transfer (VLNT) surgery, where healthy lymph nodes were taken from her armpits and inserted into her leg in a bid to reduce swelling.

Sarah has now written a blog, Lymphosaurus Rex, to raise awareness about treatments and to help other sufferers embrace the condition.

Sarah, a full-time mum said: “When I was about three months pregnant my leg just blew up and doubled in size.

“It was like one day I went to bed with two normal legs and the next morning I woke up and had one huge leg in comparison.

“I was so shocked but doctors did tests and nothing showed up so I guess we all just hoped the swelling would go down after I gave birth.

“I was diagnosed shortly afterwards and I felt so isolated and alone, instead of enjoying precious moments with my new baby girl I was having to bandage my leg constantly to try and reduce the swelling.

“Then when I fell pregnant again it made my leg worse, this time my ankle flared up to, doctors diagnosed me with stage two lympheodema.

“I started wearing baggy trousers and long dresses to hide my leg as I felt ashamed, but now I’ve learnt that lympheodema is a part of who I am so I want to encourage people to embrace it too.”

Sarah has compared her leg to a ticking time bomb as it can flare up from a tiny scratch or bump.

The qualified primary school teacher sold the family car earlier this year and spent her savings on surgery to help tackle the condition.

She said: “The slightest knock or bump can cause a huge flare up.

“When I was first diagnosed it was like, hey you have a huge leg, it’s going to be that way forever.

“I was never told about surgeries or options that could make a huge difference.

“After starting my blog and Instagram page I was made aware of all the different treatments available and I realised how many people all over the world were suffering from the same thing.

“In May I underwent surgery which involved taking healthy lymph nodes from just below my armpits and putting them in my leg to help.

“The surgery takes minimum one year to start working and see significant results but I’ve seen a huge difference already.

“I’d recommend anyone to explore the different options for the condition, I’m never giving up and although there’s not a cure yet I believe I will beat this condition.”

Sarah admits that until recently the biggest impact Lympheodema had was on her own self-esteem due to strangers staring and making rude remarks.

She added: “I often have strangers coming over to me when I’m out asking bluntly what’s wrong with my leg.

“I often just laugh now and tell them I’ve been attacked by a shark and walk off, it definitely stumps people.

“I’ve only become more confident recently and started wearing shorts and dresses again, having lympheodema can make getting dressed a real challenge.”

Sarah is supported by her family including husband Bruce, 38, daughter Charlie, three and son Jagger, one.

Sarah said: “My family are my world and I can’t thank them all enough for keeping me positive.

“I want to show others that even with lympheodema you can still wear anything and be beautiful, don’t hide yourself away.”

What are the early warning signs of lymphoedema?

Subjectively these may include transient swelling of a limb or other region of the body. Other symptoms may include aching, heaviness, stiffness, limitation of movement, tightness or temperature changes. Clothing, jewellery or shoes may feel tighter. Lymphoedema is not usually a painful condition but some people report pain and tension in an affected limb or body part.

Patients report that the swelling associated with lymphoedema is often aggravated by heat, at the end of the day, with overuse, with sustained positions and prolonged inactivity. They report that gentle exercise, elevation, massage and compression can ease their symptoms.