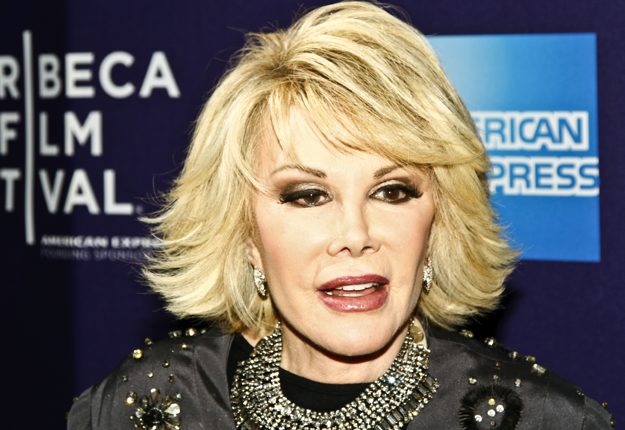 We woke up to some sad news this morning with the passing of Joan Rivers, aged 81, the world has lost one of it’s most outrageous female comedians.

Joan Rivers had been on life support since the weekend and sadly it had to be turned off Thursday morning. Rivers had suffered a heart attack during a surgical procedure and was placed on life support. It is understood that she died shortly after the family made the gut wrenching decision to turn off life support.

Her daughter issued a statement shortly after:

“It is with great sadness that I announce the death of my mother, Joan Rivers. She passed peacefully at 1:17 p.m. surrounded by family and close friends. My son and I would like to thank the doctors, nurses, and staff of Mount Sinai Hospital for the amazing care they provided for my mother. Cooper and I have found ourselves humbled by the outpouring of love, support, and prayers we have received from around the world. They have been heard and appreciated. My mother’s greatest joy in life was to make people laugh. Although that is difficult to do right now, I know her final wish would be that we return to laughing soon.”

Joan was well know for her over the top one liners and certainly never held back, happy to tackle any topic. Some of the best one’s though were when she would take pegs off herself.

To celebrate her life we have put together some of Joan Rivers funniest one-liners:

My personal favourite is number 10. Do you have a favourite?
Main image courtesy of Shutterstock.com