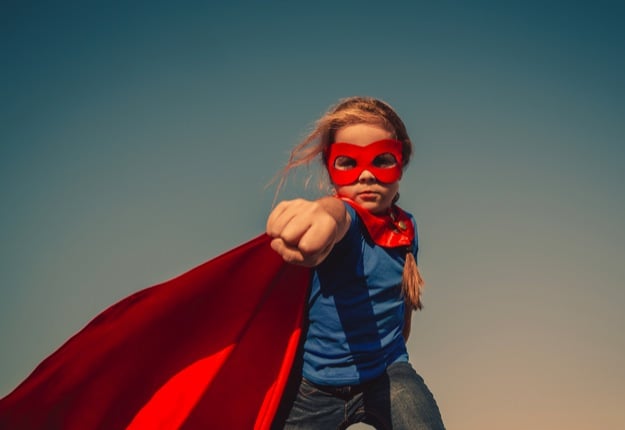 To be a hero seems like a pretty big commitment to add to your bucket list. It’s a label we give to people who save babies from burning buildings, to Batman, to brave soldiers that fought in the wars of yesteryear and to those who survive the most catastrophic events.

But it’s not generally something we tick off our to-do list at the end of the day – and I think it should be.

Let’s redefine what a hero is for our children, steering it away from cape-clad comic book characters and towards the everyday people who display even just one small act of kindness, selflessness or courage to make someone else’s day that little bit brighter.

Here are five quotes from some of history’s own heroes that may inspire your kids to join their ranks:

We do not have to become heroes overnight. Just a step at a time, meeting each thing that comes up…discovering we have the strength to stare it down – Eleanor Roosevelt

It takes a special sort of woman to be a First Lady, and a truly courageous one to use the platform to speak out about civil and women’s rights, sometimes even in contradiction to her husband’s policies! When a day seems unsurmountable and then suddenly it is over, we should reflect on Eleanor’s quote and pat ourselves on the back – we were a little bit heroic to get through it, after all.

No act of kindness, however small, is ever wasted – Aesop

Whether Aesop, thought to be an ancient Greek story teller, ever existed is up for debate, but if one thing is for sure, the Internet attributes every-second inspirational quote, written in cursive and set against a background of the sun setting over the ocean, to the guy. But whether he uttered it or not, his quote reminds us that the reward of kindness far outweighs the effort.

Known for the speeches that inspired Britain through the toughest of times, it’s impossible to talk about the twentieth century without the name Winston Churchill appearing at least once or twice. When a hero can be made through such opposite means, how hard could it be to just do one once in a while?

For a person who endured what Maya did as a child and come through the other side with determination and a smile, she meets the criteria of heroism in its grandest form. And if a true hero of history tells us that we can be one to, it is wise to listen to their advice!

Promise me you’ll always remember: You’re braver than you believe, and stronger than you seem, and smarter than you think” – Christopher Robin to Winnie the Pooh

Moments in every single day require each and every one of us to be brave, strong and smart. These are the attributes of the quintessential comic book heroes, and they are in all of us, sometimes it just slips our minds.

How do you encourage your children to be an everyday hero?